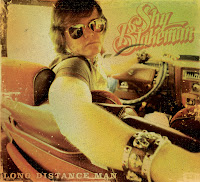 One of the things I enjoy about doing a blog and being on Twitter is having the chance to interact with musicians whose creative output might be something I would enjoy. I tend to not listen to a lot of current radio, so this is the perfect way for me to be exposed to new music that might not otherwise hit my radar.

This past weekend, one such opportunity came my way. I was pleased to be followed by a Texas artist by the name of Shy Blakeman (he can found on Twitter at https://twitter.com/#!/ShyBlakeman and his website http://www.shyblakeman.com). He describes himself as “an old soul” who “melds together all the rural sounds from below the Mason-Dixon Line in order to create unique music that is hard to define by one genre”.


Shy is doing something a bit radical with his third studio album Long Distance Man. He is giving away it away for free as a download on his website. Anyone who wants a copy can have it. His view is that music is meant to be shared, and he wants to share his compositions with anyone who will appreciate them.

Now, I’m not one to look some gift free-music in the mouth. I went to Shy’s website, heard a sample of his songs and really liked them enough to do the download. This is some solid music - compositions with great melodies and relatable lyrics.

The album opens with the title track. “Long Distance Man” has a classic 70’s rock sound to it, with guitars that have a funk groove to them. I love the keyboards too. I like how the phrase “long distance” is interpreted in a number of ways, both in the travel sense and as a sexual innuendo as well.

“So Many Honky Tonks” has a great beat to it too. I can see this being a popular tune to get the crowd on their feet to sing along.

The next track, “Don’t It Make You Wanna Dance”, actually does make me want to dance too. It definitely gets my toes-a-tappin‘.

Things slow down a bit with “Dragon Fly”, a song that brings to mind sitting on a back porch on a warm summer night. You can hear the crickets in the background as Shy fills the evening with sweet strumming. Very laid back and relaxing.

From those evening hours to sunrise, it is time to go with “Late Night Early Morning”. It too has gentle rhythms as the lyrics reflect on the night’s activities.

I can honestly say I‘ve never had “Swamp Water Whiskey” but I bet it goes down as smooth as this song.

“A Quarter To Three” is another track that smolders with steady heat. I love the piano on this one and the horns too. Shy has got a tight, rocking band to back him up.

The guitars on “Cannon Ball” transport me a place where moss grows heavy on the trees; the music is beautiful and entrancing.

I love the touch of New Orleans in the sound of “Old Folks Blues” thanks to the horns.

Next up is “Easy Goin’ Woman”, a song about taking life as it comes and wherever it leads. Shy makes it sound mighty tempting; there are days I wish I could live life in a similar way.

“Livin’ Proof” can very much be seen as a biographical song. It celebrates life on the road and sharing music with those who come out to hear it. I found myself singing along with the chorus by the time the song was coming to an end. Very catchy.

The rhythm on “Satin Sheets” has a slinky, sexy style to its strut, and a searing guitar solo to boot.

The album closes with “Save A Little Room”, a song about looking forward to those homecomings even if they are few and far between. It has a warm, sentimental feel to it and sounds like it would make for a great show closer.

I mentioned at the opening that Shy Blakeman describes himself as “an old soul”. After listening to Long Distance Man, I interpret his description as someone who has an appreciation of older musical styles and tries to incorporate those elements into his own work. And, as someone who loves music from many decades including the 70’s and 80’s, I think he accomplishes this very well indeed. These thirteen songs have a familiar feel, like an old friend you look forward to catching up with after being away too long.

Do yourself a favor and visits Shy’s site. If you like what you hear, give the songs a download. I am certain he’ll appreciate it that you are enjoying his music.
Posted by Martin Maenza at 4:31 AM

Great stuff! I really like, "Swamp Water Whiskey." - Do what you've gotta do, to make your dreams true!

Love his music. Been listening all day everyday in work. Can't get enough of it!