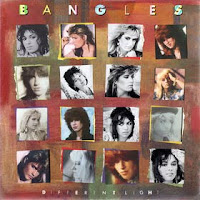 After their 1984 debut album All Over the Place (click here for my review of that one), the Bangles followed it up in January of 1986 with their second album Different Light. The record was the group’s best selling to date, having gone multi-Platinum a number of times over. It reached the number 2 spot on the US Billboard Album chart, number 2 in Australia, number 3 in the UK, number 5 in Norway and number 19 in Canada.


Side one opens with “Manic Monday”, the first single from the album. Penned under the pseudonym of “Christopher“, Prince originally wrote it for Apollonia 6 in 1984; two years later, he offered it to the Bangles to record. The song about that first workday of the week doldrums went to number 2 in the US, the UK, Ireland, Germany, Austria and Canada. Additional keyboards and a harp were provided to give this one its rich, 60‘s carefree sound.

The bands typical three guitars/one drums rock sound is more evident on “In a Different Light”. The lyrics are about appreciating things in someone that others just do not see.

The fourth single from the album “Walking Down Your Street” went to number 11 on the US Billboard Hot 100 and number 16 in the UK. The music on this one is bouncy and up-beat; the lyrics are about being completely hung up on someone. I get the sentiment of this one; I can remember my own teenaged years when I’d ride my bike past the house of a girl I liked in hopes that she might come out at just the right time so we could talk.

“Walk Like an Egyptian” was the third single from the album; it hit number 1 in Australia, the Netherlands, Germany and the United States. I remember well how this song heated up the dance floors in the winter of 1986; it is such a fun, infectious tune that it makes you want to do the dance.

“Standing in the Hallway”, an up-beat song about realizing a relationship is falling apart, has funky rhythms as well as a steady beat by Debbie Peterson. This is one of those tunes that grow on me the more I listen to it.

“Return Post” features another style change, this one a bluesy riff with subdued guitar chords and brushed drumming. The lyrics are about writing letters in a long distance relationship.

Side two starts with “If She Knew What She Wants”, a song written by Jules Shear for his 1985 album The Eternal Return. The Bangles rewrote the lyrics to change it from first person to third person and released it as a single; it hit number 29 on the US Billboard Hot 100 and number 31 on the UK charts.

“Let It Go” is up next, a track jointly written by all four ladies in the band.

Penned by Alex Chilton, “September Gurls” first appeared on the 1974 album Radio City by Big Star. Michael Steele took over the lead vocal duties from Hoffs on their cover of this classic slower ballad.

The Bangles kick the tempo back up with the rapid-fire “Angels Don’t Fall in Love”. I like how they do a number of rhythm changes up on this one as well as the ending.

The fifth single “Following” was only released in Europe; it went to number 22 in Ireland and number 55 in the UK. Steele sang the lead vocals on this track as well as played acoustic guitar on this folk ballad. The lyrics focus on the themes of jealousy and obsession after a couple has broken up. The whole song has a moody atmosphere to it.

The album closes with “Not Like You”, a swaying mid-tempo rocker.

I was in college for my junior year at the time Different Light was released; I picked up a copy of it on cassette at the campus bookstore, having already become a fan of the Bangles from their first album. What I like about this record is that it showed the musical range of the band with a variety of styles and sounds. Yes, there is the pop-rock sound of the hit singles but the deeper cuts offer a number of interesting gems as well.
Posted by Martin Maenza at 4:30 AM

A bit of Bangle never hurt my feelings! They had such a great pop rock sound, and they were one of the few all girl bands who did their own music (reminds me -- how about a review of Vixen's first record?).

I saw the girls in Ft Worth a little over 10 years ago. It was a little club, and I was very close to the stage. They hadn't played together for years, and they were a bit rusty at points. But they sounded great, and Susannah was as sexy as ever with her side-to-side eye movement action.