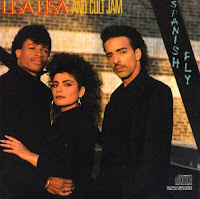 Following their platinum selling debut album Lisa Lisa & Cult Jam with Full Force (click here for my review of that album) in 1985, the freestyle R&B group from New York City went to work on their second album. Once again, the R&B group Full Force stepped into the role as producers on this album (why mess with a formula that worked the first time?). 1987‘s Spanish Fly was the group’s best charting album to date, reaching number 7 on the US Billboard Hot 200 and number 7 on the US R&B charts. It also generated a number of hit singles including two number 1 records.


Side one opens with “Everything Will B-Fine”. As the fourth and final single from the album, it went to number 9 on the US R&B singles chart. No surprise that the song did well on the Dance charts (reaching number 22) as it opens with an irresistible freestyle beat thanks to Michael Hughes on the drums and Spanador (aka Alex Moseley) on the keyboards. Lisa Lisa’s vocals blend well with the groove, creating a sizzling dance jam. Whenever I hear this one, I am instantly back in the clubs with the lights spinning overhead and the big speakers thumping from the bass.

The first single from the album was “Head to Toe”. The song went to number 82 on the UK charts. In the US, it was a triple-threat number 1 single (it held that top spot on the Dance, R&B and Billboard Top 40 charts). The song is a mix of the classic 60’s Motown harmonies with the freestyle rhythms that Cult Jam was known for laying down. This is my favorite song on the album (and since I love the entire record so that is saying a lot) and it has a lot of great memories tied to it from my final year of college.

The dance party does not let up just yet. “A Face in the Crowd” features another infectious beat and a guest appearance by Full Force as well. Lisa Lisa meets a performer at a concert and makes a connection, yet the guy does not remember her upon the next meeting. The sound on this song is pure mid-to-late 80’s club coolness.

As the side nears its end, it is time to slow things down a bit. “Someone to Love Me for Me”, the third single from the album, went to number 78 on the Billboard Hot 100 and number 7 on the R&B charts. The ballad, a beautiful song about being appreciated for all that you are, is a duet between Full Force’s Bowlegged Lou and Lisa Lisa.

The side closes with “Talking Nonsense”, a minute or so long track with Lisa Lisa and Michael Hughes having a conversation that quickly devolves into baby talk.

Side two starts with “I Promise You”, an incredibly funky jam. Hughes’ drums are in the spotlight here, driving the number relentlessly. Spanador has a great keyboard solo too. I cannot listen to this one without my feet starting to move and my spine starting to sway in time.

“A Fool Is Born Everyday” continues the mood set from the last track. Once more, the guys deliver another amazing groove while Lisa Lisa’s vocals dance effortlessly on it.

“Lost in Emotion” was the second single from the album and the second number 1 for the group. It topped both the Billboard Top 40 and the R&B charts; it also reached number 8 on the Dance charts, number 27 on the US Adult Contemporary charts, and number 58 on the UK charts. I remember this one being heard all over the radio in the fall of 1987, my final months of college. It was a fantastic track, a celebration of falling in love with someone special and experiencing that feeling that is so difficult to put into words (but you know it when you’re in it). I can remember dancing and singing along to this one on many a night out at the local dance spots in Rochester, New York.

The tempo kicks back up one more time for a final groove “Playing With Fire”. Spanador gets a chance to hit the spotlight with his guitar playing on this one. Lisa Lisa has a confident attitude on the vocals, pointing out that she’s not one who you should underestimate.

Spanish Fly is another one of my favorite albums from the 80’s. Along with Lisa Lisa and Cult Jam’s debut album, this is one of those records I have listened to countless times in the past and never, ever tire of. I had a copy of it on cassette which I played constantly until the tape finally wore out. I picked up a copy of it on CD in the late 90’s and burned it digitally a number of years back for my mp3 library. It is on my iPods, my iPhone, my iPad; I never leave home without it. It is always guaranteed to put me in a great mood, no matter how tense or stressed things get. When I hear these amazing rhythms and angelic vocals, all my cares just melt way as they can’t possibly keep up to the groove. And since my dance club days are long behind me, the songs on this one also are perfect for a cardio work out.

If you’ve never heard this album and you love old school freestyle dance grooves, you owe it to yourself to have a little Spanish Fly.
Posted by Martin Maenza at 4:30 AM