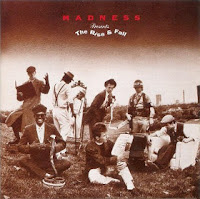 Today (October 8th) marks the thirtieth anniversary of The Rise & Fall, the fourth studio album from the English pop/ska group Madness. The album spent twenty two weeks on the UK charts, topping out at number 10. It also went to number 34 in Norway, number 29 in New Zealand and number 1 in Sweden. Many of the songs fit into a theme of nostalgia of childhood.

Side one begins with “Rise and Fall”, a song that reminisces about the neighborhood where one grew up even though it has so greatly changed. I like how the tempo changes up from the slower verses to the quicker chorus.

“Tomorrow’s (Just Another Day)” was released as part of a double A-side second single; it went to number 8 in the UK. The song about trying to find the strength to go on has an old-fashioned feel thanks to Mike Barson’s keyboards and Lee Thompson’s saxophone.

“Blue Skinned Beast” is a political satire about Prime Minister Margaret Thatcher and her handling of the Falklands War at the time.

“Primrose Hill” sounds like a very proper sort of place, and thus the music for the song has a similar stiff tempo to it. It seems like a very lonely, isolated dwelling.

“Mr. Speaker Gets the Word” too has an interesting rhythm to it. It opens and closes with a discussion between politicians, possibly from Parliament.

“Sunday Morning” paints a picture of a domestic dwelling during the early hours of the week’s day of rest.

Side two opens with “Our House”, the first single from the album. Thanks to a quirky video on MTV, the song went to number 7 on the US Billboard Hot 100. It also went to number 17 in Australia, number 5 in the UK, number 4 in both Norway and Switzerland, and number 1 in Sweden. The lyrics of the up-tempo song describe the lives of a working class family. My fond memories of this song were first hearing it on the local college radio station before it got mainstream airplay in the US; thanks to a phone-in contest I won a twelve-inch single of the song on vinyl.

“Tiptoes” has a bit of a marimba beat to it. The lyrics tell of someone who has fallen from the roof.

“New Delhi”, naturally, has a more exotic sound to it musically as it tells of an arrival to India.

“That Face” is a reflective song about looking in the mirror but no longer recognizing the person that used to be there.

“Calling Cards” gives a who’s who of the British banking companies of the early 80’s.

“Are You Coming (With Me)” is up next. I have to say that is the track on the record that did the least for me.

“Madness (Is All in the Mind)” was the second half of the double A-side. It was on the UK charts for nine weeks in total. This one has a jazzy swing to it that reminds me of old Cab Calloway tunes.

Admittedly, my exposure to the music of Madness has been very limited up until now. I knew of some of the singles that were hits on this side of the pond but that is about it. The Rise & Fall showed me that the group dabbled in numerous musical styles with some very intriguing results. This is definitely one of those albums that would require multiple listens to pick up all the nuances. Unfortunately, the availability from this one is limited to just a few tracks that show up on the group’s career-spanning collections.
Posted by Martin Maenza at 4:30 AM

Here's another link that may be of interest to you. Tiptoes is actually about the (S) word

Thanks for reading and the comments. I have to ask - the (S) word? Not sure I am following you here.


I've always thought Tiptoes was about Suicide or loosely related to it in some way but I could be wrong?

I think I can see that in the song. Good catch.