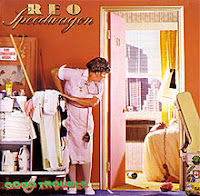 This month marks the thirtieth anniversary of Good Trouble, the tenth studio album from the American rock band REO Speedwagon. This June 1982 release was the follow up to their smash hit Hi Infidelity album (click here for my review of that one). The album went to number 7 on the US Billboard Hot 200, number 7 in Norway, number 39 in New Zealand and number 29 in the UK.


Side one begins with "Keep the Fire Burnin'", the hit first single which went to number 7 on the Billboard Hot 100 and number 2 on the Mainstream Rock charts. The lyrics of this mid-tempo tune are a plea to keep the relationship going despite any changes the participants are going through. Cronin’s acoustic guitar strumming keeps it light and non-threatening.

The second single "Sweet Time" stalled at number 26 on the US Billboard Hot 100. This ballad about enjoying every moment you have with the one you love was a popular slow-dance song during the fall of my final high school year.

"Girl with the Heart of Gold" is a song about a guy who has broken hearts but is changing his ways thanks to the perfect girl.

"Every Now and Then" is about the things that remind one of a former relationship, that someone for whom you still have fond feelings.

"I'll Follow You" tells the tale of meeting a stranger late at night at a twenty-four café and hitting it off instantly. The track has a rollicking piano riff that gives it incredible energy.

Side two opens with "The Key", a mildly successful track on the Mainstream Rock charts (it got as high as number 34). The lyrics tell of a troubled man who wants to love again but realizes he is the only one who can let another person into his heart.

"Back in My Heart Again" has a different rhythm due to how Cronin delivers the lyrics. He punctuates every word on the verses. It is almost like a steady, pounding heart beat.

"Let's Be-Bop" is a strong, guitar-based number with a driving rhythm. The lyrics relate to the band and their rise to fame, acknowledging the support of the fans.

"Stillness of the Night" went to number 19 on the Mainstream Rock charts. It is propelled by the fierce drums of Alan Gratzer. There are also a couple searing guitar solos by Richrath.

The title track "Good Trouble" closes the album. It only got to number 51 on the Mainstream Rock charts. Neal Doughty’s organ is featured on this one about meeting a young woman after a show for a little fun into the wee hours of the morning.

Good Trouble is pleasant enough background music, perhaps cranked while working out in your garage on your car or such. REO Speedwagon had a nice sound that was easily recognizable and the group does not veer too far from what has worked for them in the past. The lyrics are not very deep and tend to stick with tried-and-true phrases and imagery.
Posted by Martin Maenza at 4:30 AM