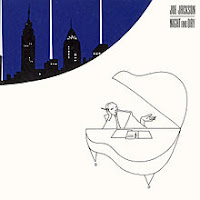 This month marks the thirtieth anniversary of the release of Night and Day, the fifth studio album from English singer/songwriter Joe Jackson. The title comes from a Cole Porter song with the whole album done in tribute to the composer and, indirectly, to New York City.

The June 1982 release is Jackson’s highest charting album to date. In his native UK, the record went all the way to number 3. In the US, the album reached number 4 on the Billboard Hot 200.


Side one opens with “Another World”. The lyrics paint the city as some place foreign and strange, with a rhythm and a culture all of its own. Sue Hadjopoulos on the congas gives the song a bit of a Latin flavor while the xylophone adds a bit of an Oriental touch.

The exotic Oriental sound continues into the next track “Chinatown”. The synthesizer chords add to the nervous mood of the piece as a man finds himself in an unexpected part of the city

“T.V. Age” fuses jazz and electronic elements to make a commentary on people who spend their non-working waking hours sitting in front of television. Jackson provides the saxophone solo here.

“Target” goes with a Latin, samba rhythm as the backdrop for its look at violence in the streets. I really like the percussion solos on this one.

The first side closes with “Steppin’ Out”, Released as the second single from the album, it went to number 30 in Australia, number 28 in Germany, number 21 in New Zealand and number 6 in the UK. Over in North America, it reached number 5 in Canada and number 6 on the US Billboard Hot 100. It was nominated for a Grammy award in the categories Record of the Year and Best Pop Vocal Performance Male. The lyrics tell of getting ready for a night on the town; this one often played well to the theme of our teenaged excursions out to dances and such. The piano hooks are 80’s classics.

Side two begins with “Breaking Us in Two”. As the third single, it only reached number 90 in Australia, number 59 in the UK, number 40 in Canada and number 35 in New Zealand. In the US, it climbed all the way to number 18 on the Billboard Hot 100. This one always fills me with a bit of sadness when I hear it; it reminds me of relationships that did not work out the way one hopes. The piano and gentle percussion add to that mood of loss and disappointment.

The Latin rhythms return on “Cancer”, a sarcastic stab at life and how the medical community seemingly implies that everything is bad for you. Its chorus refrain is “everything gives you cancer”.

“Real Men”, the first single of the album, only charted in Australia (at number 6), New Zealand (at number 48) and the Netherlands (at number 17). The lyrics refer to the early gay scene in New York where macho males could swing either way. Musically the track has a throwback sound to 60’s pop.

“A Slow Song” closes the album with a seven minute statement about loud, noisy dance clubs and the lack of opportunities where a couple can dance close and intimate.

Prior to listening to this one for review, I was only familiar with the two hit singles. However, I found all of Night and Day to be superb in both words and sounds. Joe Jackson and his ensemble blend musical styles with amazing results, creating a melding pot to feed hungry listeners. The lyrics are smart and thought-provoking.
Posted by Martin Maenza at 4:30 AM

Email ThisBlogThis!Share to TwitterShare to FacebookShare to Pinterest
Labels: 80's, Breaking Us In Two, Joe Jackson, music, Night and Day, Steppin' Out