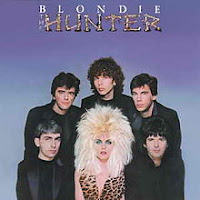 Today June 5th is the 30th anniversary of the release of The Hunter, the sixth studio album by Blondie.

The record went to number 33 on the US Billboard Hot 200, number 49 in Germany, number 19 in Norway, number 18 in Sweden, number 15 in Australia, and number 9 in the UK. After three Platinum selling releases in a row, this one represented a drop-off in sales. It was also the last studio album the group would put out until they re-united seventeen years later in 1999.


Side one opens with the wild monkey screams of "Orchid Club". Clem Burke’s drums then set the tone for this primitive sounding piece. Debbie Harry’s exotic vocals add to the overall mood as well. The whole thing builds to a tribal chant near the end.

"Island of Lost Souls", with its strong calypso influence, was the first single from the album. While it only reached number 37 on the US Billboard Hot 100, it did well in many other countries (number 18 in New Zealand, number 15 in Ireland, number 13 in Australia, and number 11 in the UK). I had this one on a 45 and liked it a lot. I would get lost in the tropical swing, the steel drums, and the horns. The lyrics dealt with getting away to somewhere new and starting over again.

The B-side of the first single "Dragonfly" is next. The lyrics have a sci-fi theme as they tell of a race competition in outer space. I remember flipping over my 45 and playing this one too on occasion. It was definitely a different kind of piece which made it appealing.

"For Your Eyes Only" was originally written for the 1981 James Bond film of the same name but the producers preferred one composed by Bill Conti and Michael Leeson instead. They offered Blondie that version track to record that but the band declined; Sheena Easton then recorded it for the film. This one written by Harry and Chris Stein definitely has that Bond feel, especially to the music which includes that 60’s spy sound.

"The Beast" is a reflection of Debbie Harry's experiences on becoming a publicly recognized figure. It has a funk groove to it thanks to Nigel Harrison on bass. Harry incorporates her rap skills on this one.

Side two begins with "War Child", a dance song that focuses on the military conflicts in both the Middle East and in Cambodia. As the second single, it went to number 96 in Australia, number 39 in the UK and number 21 in Ireland. The CD re-issues of the album included an eight-minute extended version of this track.

The B-side to the second single "Little Caesar" is next. This one, about a man in drag who goes by the initials L.C., has a bit of a tropical sound to it as well.

"Danceway" is an up-tempo track that brings to mind the days of Motown in the 60’s. Keyboardist Jimmy Destri wrote this one.

"(Can I) Find the Right Words (To Say)" is the first track on the album that sounds a lot like the classic Blondie tracks from their earlier albums in the 70’s.

"English Boys" is a melancholy tribute to the Beatles and innocent idealism of the 60's. It is also in response to the assassination of John Lennon in December of 1980.

The record closes with a cover of "The Hunter Gets Captured by the Game", a song originally recorded in 1966 by the Marvelettes. This version emulates that 60’s sound well without too much extra experimentation; I like the jazzy vibe of it.

The Hunter is definitely a mixed bag of tracks. As they had done on their last album, Blondie was continuing to experiment with musical styles and sounds. Some worked better than others. Overall though it is a decent album and worth checking out.
Posted by Martin Maenza at 4:30 AM