Oingo Boingo - Nothing to Fear 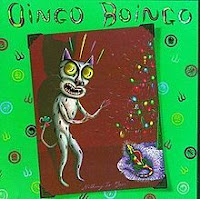 Coming off of their 1981 debut album Only a Lad (click here for that review), the California based alternative rockers followed it up with their second studio album Nothing to Fear. Today (June 22nd) marks the thirtieth anniversary of the release of that record.

While it faired a bit better on the US Billboard Hot 200 over the previous release (hitting 148 versus the debut’s 172), the album and band often found its audience thanks to college radio stations and club deejays who enjoyed the band’s quirky sound and thought-provoking lyrics.


Side one begins with an exploration of “Grey Matter”. The opening synthesizer line is almost hypnotic, like a psychological therapy session has just begun. I’ve always liked the cool effect of percussion on the verses as it travels from one speaker to another.

The opening of “Insects” always makes the hairs stand up on the back of my neck; the synthesized sound of buzzing insects is so realistic. The group’s horn section of Dale Turner, Sluggo Phipps and Leon Schneiderman are prominently featured here. As this swirling, swarming track progresses, Danny Elfman’s vocals get more agitated and violent.

The original vinyl release of the next track “Private Life” ran for a full three minutes and forty five seconds; the single version and later re-releases removed a prominent bass guitar and glockenspiel solo. The lyrics and music paint a picture of a man who has withdrawn to a place of solitude and now begs for someone to help him break the loneliness.

“Wild Sex (In the Working Class)” is a high-energy, danceable track about how the driving machinery stirs up the sexual feelings of a factory worker, resulting in him hurrying home to his lover to act on the urges. The song was featured in Sixteen Candles, the 1984 film by John Hughes.

“Running on a Treadmill” is about a man who is so frustrated in his relationship that he feels like he is making no progress despite how hard he tries.

Side two starts by taking the “Whole Day Off” to escape the horrors of a dead-end life. Neither his run-down home nor his uninspiring girl-friend gives him the will to live.

The title track is next. “Nothing to Fear (But Fear Itself)” is a famous line from the inaugural address of Franklin D. Roosevelt, the 32nd President of the United States, which in turn was first credited to Sir Francis Bacon, the 16th century philosopher. I really like the cascading horns and the double-time chorus on this one. The lyrics are a commentary of modern times, of people living in fear of the Russians, the Middle East, disasters, lecherous perverts and more.

“Why’d We Come” is a crossroads point in a relationship, where one of those involved questions why they had to get so invested with time and emotions only to realize things would not work. The composition contributes to the confused state.

“Islands” is a song about feeling isolated, separated entirely from the person in their life who supposedly cares about him. The song works on a very primal, emotional level.

The final track “Reptiles and Samurai” is a portrait of insanity. They represent the voices in his head, paranoid and controlling.

I remember first discovering the songs of Oingo Boingo from the local college radio station at Fredonia State; listening to their deejays was a big part of my later high school years. I quickly became a fan of the group, seeking out Nothing to Fear from our local Record Giant store as the first vinyl from the group to add to my collection.

I really enjoyed these compositions by Danny Elfman. The sounds from the band and the lyrics of the songs were edgy, dark, rebellious and just a little bit disturbed - all things that I was not. So, in a way, they filled in a space that was not there in my world. This album really cemented my life-long following of the group.

It is a shame that Oingo Boingo retired in the mid-90’s. I am sure they would have continued to make amazing music together.
Posted by Martin Maenza at 4:30 AM