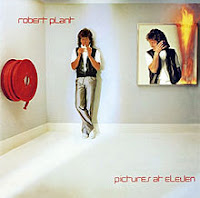 After Led Zeppelin broke up in 1980, a number of the members went on to solo careers.

Thirty years ago today (June 28th), singer/songwriter Robert Plant released his first solo album Pictures At Eleven. This 1982 release went Platinum in a number of countries and performed well on the charts. It went to number 32 in Sweden, number 17 in Norway, number 16 in New Zealand and number 2 in the UK. In the US, it went all the way to number 5 on the Billboard Hot 200.


To assist on the record, Plant had two guest drummers. Cozy Powell, former drummer from Rainbow, played on tracks four and seven. Genesis drummer Phil Collins played on the other six tracks. Rounding out the band was Robbie Blunt on guitars, Jezz Woodroffe on keyboards, Paul Martinez on bass, and Raphael Ravenscroft on saxophone.

Side one begins with “Burning Down One Side”. This first single went to number 73 in the UK; in the US it only got to number 64 on the Billboard Hot 100 but it went all the way to number 3 on the Mainstream Rock chart. I’ll admit I had to go online to look up the lyrics as I’ve always found it hard to decipher Plant’s vocal delivery.

“Moonlight in Samosa” was the B-side to the first single in all markets except the UK (there it was as song called “Far Post”). This one is a lot clearer to follow, and I like the gentle guitar here.

“Pledge Pin”, the second single, stalled at number 74 on the US Billboard Hot 100 but climbed up to number 11 on the Mainstream Rock chart. This one has a snappy tempo to it that I find interesting.

“Slow Dancer” also moved well on the US Mainstream Rock chart (it reached number 19). This one has an exotic musical feel to it, much like a woman doing a seductive performance. Plant certainly knows how to ring out extra syllables in small, simple words, doesn’t he?

Side two starts with “Worse Than Detroit”, a track that went to number 10 on the US Mainstream Rock chart. This track is heavily influenced by the blues, and it reminds me a bit of early Aerosmith and, of course, older Zeppelin.

The B-side to the second single was “Fat Lip”.

“Like I’ve Never Been Gone” is the only song on the album where the title actually appears as part of the lyrics.

I think my favorite drumming by Collins comes on “Mystery Title”.

For me, Pictures At Eleven comes across very much like a Led Zeppelin album. That is mostly due to Robert Plant’s distinctive vocal style; as co-composer of all the tracks they musically have that classic group’s sound. Not that there is anything wrong with that. I certainly find myself in the occasional mood from some Zeppelin. I think, though, if I had the choice between putting on this record or something more classic from the 70’s, I would do the later.
Posted by Martin Maenza at 4:30 AM