Survivor - Eye of the Tiger 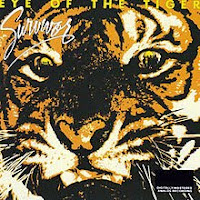 This multi-Platinum album went all the way to number 2 on the US Billboard Hot 200 chart. It had a trio of songs that graced the singles charts and two that were featured in motion pictures.


Side one opens with the title track. Used as the theme song for Rocky III, “Eye of the Tiger” was a smash hit single all across the globe. It went to number 13 in Germany, number 6 in Switzerland, number 5 in Sweden, number 4 in New Zealand, number 3 in Italy, number 2 in the Netherlands and Austria, and number 1 in Australia (for five weeks), Canada, Finland, Ireland, Norway and the UK (for three weeks). In the US, it spent six weeks at the number 1 spot on the US Billboard Hot 100 (dethroning the Human League’s “Don’t You Want Me” and succeeded by Steve Miller Band’s “Abracadabra”) and four weeks at number 1 on the Mainstream Rock charts (between 38 Special’s “Caught Up In You” and Eddie Money’s “Think I’m In Love”).

I love how this one starts with that constant guitar riff followed by the punctuation of the other instruments. It instantly gets me pumped, which is exactly the intent of the song. Whenever my son and I are playing Rock Band, this is one of my go-to songs to sing. Having heard it so many times in the early 80’s, I don’t even need to see the words scrolling by. Once in awhile, just to mess with my son and try to get him to laugh so hard he‘ll miss guitar notes, I will substitute the lyrics to Weird Al’s parody “Theme from Rocky XIII”(‘’…the rye or the Kaiser…”).

“Feels Like Love” is an up-tempo, shout from the rooftops declaration of love.

“Hesitation Dance” has with a rocking strut of a rhythm. It brings to mind a sultry woman across the room, catching your eye and giving you that one finger come-here motion.

“The One That Really Matters”, the third single, stalled out at number 74 on the US Billboard Hot 100. The lyrics about someone being there when you need them, someone who really cares despite everything you’ve gone through in the past.

The side closes on a softer note with the ballad “I’m Not That Man Anymore”. The lyrics tell of a guy who has opened us his eyes and is no longer going to fall blindly into love. I like the keyboard bridge on this one followed by the big guitar solo that closes out the song.

Side two starts with “Children of the Night”, a song about a secret love affair that is kept to the shadows where prying eyes cannot observe.

Sylvester Stallone was such a fan of the band that he used the next track “Ever Since the World Began” for his 1989 film Lock-Up. This gentle ballad is about finding strength in a relationship to make it through to whatever the future may hold.

The second single from the album “American Heartbeat” spent seven weeks on the US Billboard Hot 100 and peeked at number 17. This one has a steady build from the opening verse to the blazing chorus.

“Silver Girl” was the B-side to the second single. The lyrics are about taking the time to appreciate those moments of intimacy that a couple shares, when they block out the world around them and get lost in each other.

Eye of the Tiger was a big album as I moved from my junior to senior years of high school. Survivor was one of those bands that got airplay both on the Top 40 and the album oriented rock stations, so the songs here could be heard quite a bit. It helped to make them part of the soundtrack of that final year of my teenaged youth.
Posted by Martin Maenza at 4:30 AM

What child of the 80's didn't grow up in love with "Eye of the Tiger"?

I pulled the album on Rdio this morning. “The One That Really Matters” really, really sounds like it could have come from Journey's RAISED ON RADIO record. Of course, RoR came out a few years later, so I guess it's the other way around.

Terrific solo on “I’m Not That Man Anymore”, as you mention. It goes for almost 2 minutes!

Survivor made some decent but generic rock albums. I prefer Journey, Night Ranger, or Asia -- aside from the great Rocky tunes, of course.