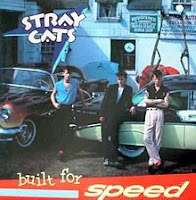 Released on this day thirty years ago (June 7th, 1982), Built For Speed was the first album by the Stray Cats released in the United States. The group had released two albums prior in the UK in 1981, Stray Cats and Gonna Ball. This release was a compilation album that took tracks from both of those records (six from the first, five from the second) to present to the American audience.


Side one opens with “Rock This Town”, which went to number 9 on the US Billboard Top 40 and number 35 on the Club Play Singles chart. Dave Edmunds and Brian Setzer co-penned it. This was one of those songs that were a big hit at our school dances in 82 and 83; everyone would just cut loose and have a ball with it. I love the guitar opening riff with the drums and bass quickly folding in.

“Built for Speed”, a new track written just for this record, is next. Lee Rocker’s bass is very prominent on this one and gives it that classic 50’s rock

“Rev It Up & Go” keeps the up-tempo party going on this tune about cruising around town in a classic car. The lines that give the song a title do not show up until the very end of the track.

“Stray Cat Strut” hit number 3 on the US Billboard Top 40, number 78 on the Club Play Singles chart, and number 4 on the Mainstream Rock chart. I have always liked the slinky musical arrangement on this one; it perfectly emulated the feline mystique.

“Little Miss Prissy” opens with a heavy guitar riff from Setzer. In some ways this song about an up-tight London gal reminds me a bit of the very early music by the Beatles, which was inspired by the American R&B performers of the 50’s. It all comes around full circle here.

The side closes with “Rumble in Brighton”, a song very reflective of the troubled times in England in the late 70’s and early 80’s. The police were helpless to stop the violence and most everyone else just watched the spectacle.

Side two takes off with “Runaway Boys”. The lyrics lament about the troubles of being a restless teenager whose parents do not understand him. Thrown out of his home, he has to live on the street and avoid getting in trouble with the law.

“Double Talkin’ Baby” kicks things back into gear with the high-energy dance beat of a song about a girl who is a bit of a tease. She cannot decide what she wants and it is driving her man crazy.

“You Don’t Believe Me” has a wonderful blues sound to it thanks to Setzer’s wailing guitar.

“Jeanie, Jeanie, Jeanie” was originally recorded by Eddie Cochran in 1958. As Cochran was one of the artists who inspired the Stray Cats, they felt justified in covering the tune here.

The final track is “Baby Blue Eyes”, another up-tempo toe-tapper about a lovely lady with enchanting eyes.

In the summer of 1982, I picked up a copy of Built For Speed on vinyl from our local Record Giant store. I had always been a fan of the early days of rock and roll and watched plenty of episodes of Happy Days in the 70’s and early 80’s. The music of the Stray Cats fell right into that whole nostalgia wave with nearly all original compositions. The tracks on this album are full of energy and fun.
Posted by Martin Maenza at 4:31 AM