Barry Manilow - This One's For You 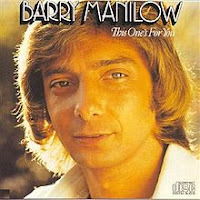 Today (June 17th) is the sixty-ninth birthday of American singer-songwriter Barry Manilow. In 1964, he penned his first original score for an off-Broadway musical. In the late 60’s and early 70’s, he had a lucrative career as a commercial jingle writer. At night, he played piano for singer Bette Midler on her albums and tours. He also started to record his own albums.

In 1976, Manilow released his fourth studio album This One’s For You. Like his first three releases, this one too went multi-Platinum in the US and rose to the number 6 position on the US Billboard Album chart.


Side one opens with the title track. As the album‘s first single “This One’s For You” peaked at number 29 on the US Billboard Hot 100 yet hit number 1 on the Adult Contemporary charts. The lyrics tell of a singer who performs a song, despite the fact that it wasn’t a big seller or particularly a crowd favorite, specifically for someone special from his past that is no longer in his life. It has a sweeping backing orchestration that gives the song added dramatic effect.

A live version of the up-tempo “Daybreak” was released as a single and featured the backup group Lady Flash. It reached number 23 on the US Billboard Hot 100 and number 7 on the Adult Contemporary charts. I remember picking this one up on a 45 back in the day; I’ve always liked its bouncy, optimistic message that with each new comes another opportunity to start again and make things better.

“You Oughta Be Home with Me” tells about a party where a guy sees the woman he is in love with walk in with another man.

Manilow goes all rag-time with “Jump Shout Boogie”, a throwback to peppy, big band songs from the 1940’s. I’ve always liked this song because its high energy; it always gets my feet tapping and blood pumping.

“Weekend in New England”, written by Randy Edelman, was released as the second single and also hit number 1 on the Adult Contemporary charts. It reached number 10 on the US Billboard Hot 100 and number 7 in Canada. This one is such a beautiful ballad full of longing. The string section adds a touch of sadness to the situation.

Side two starts with “Riders to the Stars”. The song, which deals with the aspirations of people to better their lot in life, has a steady disco beat, a prominent fixture in the dance clubs around the world at the time.

“Let Me Go” incorporates a bit of a blues rhythm to it.

“Looks Like We Made It”, the third single, was written by Will Jennings and Richard Kerr. It hit both number 1 on the Adult Contemporary charts and the Billboard Hot 100 in the US, and number 4 in Canada. The lyrics tell of a couple who could not thrive together yet managed to find true happiness while being apart. It is a bittersweet song that tugs at my heartstrings.

I like the combination of the bass guitar and the piano on “Say the Words”; they give it a bit of a soft-rock vibe.

“All the Time” slows things down again with another lovely piano ballad.

The album closes with “(Why Don’t You) See the Show Again”. He weaves another emotional tale of love here, showing his talent as a lyricist and composer.

Barry Manilow really did continue his hot streak with This One’s For You, combining hit singles with strong deeper tracks. While I knew of his earlier hits, this album was really the one that put him into my musical sphere.
Posted by Martin Maenza at 4:30 AM

I'm embarrassed to admit it, but boy this took me back--I was around 13 when his album came out & my sister and myself pooled our allowances together to get this album. (We're only a year apart so we did this for a lot of music.)

Anyway--I probably haven't listened to Barry Manilow in 30 years, but I can still remember each one of these songs, thanks for sharing Martin! :)