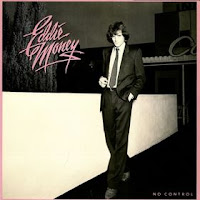 Today (June 18th) marks the thirtieth anniversary of the release of No Control, the fourth studio album from American rock singer Eddie Money.

Like his first two records, this one became a Platinum seller in the US. It topped out at number 20 on the US Billboard Hot 200 and reached number 36 on the Canadian charts.


Side one starts with “Shakin’”. As the second single, it only got as high as number 63 on the US Billboard Hot 100; on the Mainstream Rock charts it went all the way to number 9. Drummer Gary Ferguson sets the tone of this one with that steady, opening beat. Marty Walsh then chimes in with the screaming guitars. It is a classic opening. The lyrics really spoke to the teenager in me with the references to fast cars and faster women.

“Runnin’ Away”, a song about confusion in a relationship, features strong keyboards by Alan Pasqua and Randy Nichols as well as a saxophone solo by Ed Calle.

The first single “Think I’m in Love” went to number 11 in Canada, number 16 on the US Billboard Hot 100 and number 1 on the Mainstream Rock charts. Drummer Gary Mallaber, a native of Buffalo NY, provides the distinctive drums on this hit.

For the next track “Hard Life”, Money is backed by Jimmy Lyons and Ralph Carter in acoustic guitars for the first verse. The lyrics reflect upon Money’s life on the road.

The title track “No Control” closes out the first side. Money plays the harmonica on this track about giving in to one’s temper and getting into bar fights.

Side two opens with the cascading keyboards of Nichols on “Take a Little Bit”.

The mid-tempo rocker “Keep My Motor Runnin’” is next. The rhythm sticks to a steady idle of entire the three minutes of his one with Walsh’s guitar screaming throughout.

The B-side to the second single was “My Friends, My Friends”. The acoustic opening fits perfectly for this melancholy reflection upon the past and those who are no longer in one’s life.

The B-side to the first single was “Drivin’ Me Crazy”. Tony Brock is behind the beats on this very new-wave sounding track.

“Passing By the Graveyard (Song for John B.)” tells the story of a guy who lived hard and wasted his life on drugs and booze, leaving a grieving lover behind.

The album closes with “It Could Happen to You” with its throwback, classic rock sound.

I can remember hearing a number of the tracks from No Control on the local album oriented rock station out of Buffalo. Eddie Money’s whiskey-rasp voice is warm and familiar, and the compositions are tightly performed by the many musicians and produce with polish by Tom Dowd. I think after three decades it still holds up pretty well.
Posted by Martin Maenza at 4:30 AM