Thompson Twins - In the Name of Love 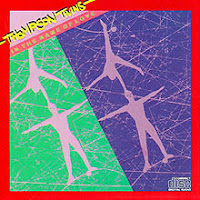 This month marks the 30th anniversary of the release of In the Name of Love, the first album from the Thompson Twins released in the United States.

This record is a compilation of tracks from the group’s first two albums. Two tracks come from 1981’s A Product Of… (Participation) and eight come from 1982‘s Set. Chart-wise, it went to number 148 on the US Billboard Hot 200.


Side one opens with an extended dance version of the title track. “In the Name of Love”, a last minute addition to Set, held down the number 1 spot on US Billboard Hot Dance Tracks chart for five straight weeks and spent twenty one weeks total on that chart. It also went to number 69 on the Billboard R&B charts. The sound here is more a kin to that which would be coming a year later on the group’s third album (heavier synth, funkier guitars, and layered percussion).

Also from Set, “Living in Europe” dips back into the sharp, harsh musical edges from the group’s first record. There is an underlying funky guitar riff though.

Another Set track, “Bouncing” has a fast paced, high energy rhythm to it, perfect for doing the pogo in a crowded club.

“The Rowe” starts out at a slower tempo on the first verse and then increases in speed as well as adds in the strong guitar presence on the second verse. Thomas Dolby provided additional synthesizers on this track.

“Make Believe” is one of two tracks from A Product of… (Participation). It opens with a dueling guitar riff before the rest of the band joins in.

Side two starts with a remix of “Runaway”. The track has a very strong percussion line (the group’s strong suit). The lyrics tell of someone who can no longer stay in a relationship and therefore takes off.

“Another Fantasy” sounds a lot like early Psychedelic Furs or Siouxsie and the Banshees, both groups that Steve Lillywhite, the producer of the Set album, had worked with previously.

“Fool’s Gold”, another track from Set that Thomas Dolby contributed to, brings back the funkier dance style with it. I like the stop-go pauses that are worked in through out.

“Perfect Game” is the other track here from the first album A Product of… (Participation). Tom Bailey’s vocals tie together the musical mosaic of changing rhythms.

“Good Gosh” has an interesting mix of synths and guitars. I like the steel drums used here and Alannah Currie on the saxophone. The vocals have a quirky tone to them.

In the spring of 1982, I was listening to the local college radio station while still attending high school. It would have been there that I first heard the Thompson Twins, in particular the tracks on this release. I was definitely a fan of the title track due to its danceable elements.
Posted by Martin Maenza at 4:30 AM