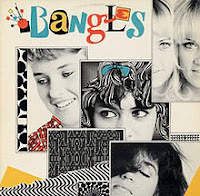 The five track EP titled Bangles was first released on the Faulty Products label. In 1983, I.R.S. Records re-released it. The four girls were joined by Craig Leon, who also produced the album, and Ethan James on keyboards.


Side one opens with “The Real World”. It opens with a hard rocking rhythm and an off-the-beat tempo. Hoffs takes lead vocals on this one.

The 60‘s rock influence continues with “I’m In Line”. You can hear touches of the early Beatles and the Yardbirds here. Debbi Peterson sings lead on this track.

Don‘t let the angelic harmonies in the opening fool you. “Want You” features a rapid-fire, thrash rock tempo to it. Vicki Peterson was lead vocalist on this track.

Side two begins with “Mary Street”, which features Vicki and Hoffs performing the lead as a duet.

“How Is the Air Up There?” is the only track of the five that was not written by members of the band. This one was written by Steve Duboff and Artie Kornfeld and recorded in 1966 by The La De Das. The cover here is full of rocking energy.

While the Bangles EP is one of those rare to find collectibles, the tracks can all be heard on YouTube if you’re interested in seeking them out. What I like about this release is that you get a true sense of the origins of the group. The girls really had a strong classic rock edge in the early days, much like fellow California gals the Go-Go’s. Clearly the Bangles were influenced by 60’s British rock and reflected that in their earliest stage performances and this recording.
Posted by Martin Maenza at 4:30 AM

Oh, My Susanna. That is all.


They really did have a fresh and fun sound, especially on those early Beatles meets Girl Group albums (the EP and the first record). A few years back when I was toying with collecting vinyl, I remember picking this one up on eBay. Too bad I don't still have it.