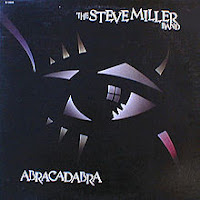 Today (June 15th) marks the thirtieth anniversary of the release of Abracadabra, the twelfth studio album from California’s own Steve Miller Band. In the US, the Platinum selling album went to number 3 on the Billboard Hot 200 and number 40 on the R&B charts. Around the world, it reached number 47 in New Zealand, number 11 in the Netherlands, number 10 in Norway and the UK, number 8 in Austria, number 4 in Canada, number 3 in Sweden and number 1 in Germany.

Side one opens with “Keeps Me Wondering Why”, the second single from the album which went to number 52 in the UK. It opens with a driving, industrial groove by Mallaber and Lewis that forms the foundation of the song. The lyrics question the continued dynamics of a relationship that has changed over time.

“Abracadabra”, written by Miller, was the first single from the album. In the US after fourteen weeks since its debut, it spent two weeks at the number 1 spot on the Billboard Hot 100; it also reached number 1 in Australia, Austria, Canada, Sweden and Switzerland. The single holds the record for the biggest drop out of the US Top 10 as it went from number 10 to number 48 in one week. This song, with its smoldering sexual energy, was huge during my senior year of high school; it was played often at school dances as well as having omnipresence on both the pop and rock radio stations. I’ve always liked the synthesizer slide that goes from one speaker to another like a burst of magic.

Guitarist Greg Douglass and bassist Lonnie Turner co-wrote “Something Special” with Mallaber; they also performed on the track. The lyrics are a simple request for affirmation of affections.

“Give It Up”, the other track penned by Miller, was released as the B-side to the first single and then released as the A-side to the fourth single. On that later release, it went to number 60 on the US Billboard Hot 100. The song’s opening is a homage to classic acapella doo-wop of the 50’s, and it also features a calliope hook performed on the keyboards.

“Never Say No” is built upon a simple but effective guitar riff. This one is more reminiscent of the Miller tunes that made his group popular in the 1970’s.

Side two begins with “Things I Told You”. This one doesn’t do a heck of a lot for me.

“Young Girl’s Heart” was the B-side to the third single. The combination of the music and the ethereal vocals give this one give this one a stalker-like vibe.

“Goodbye Love” is another Douglass/Mallaber/Turner collaboration. I like the more southern-rock/country flavor on this one thanks to the guitar riffs and the tempo.

“Cool Magic” was the third single and it reached number 57 on the US Billboard Hot 100. The track has a much laid back vibe to it.

The record closes with slower tempo of “While I’m Waiting”.

Outside of the title track and a few other standouts, Abracadabra is a very middle of the road album. The whole package is listenable and pleasant; the musical compositions very solid. But lyrically it feels to me like a bit of coasting, moving along at a comfortable pace without really going towards any particular destination.
Posted by Martin Maenza at 4:30 AM