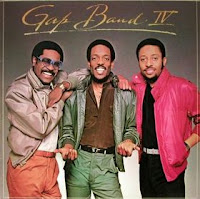 The Gap Band was a funk band from Tulsa, Oklahoma, who got their start in the early 1970’s. The group performed together for forty three years before retiring in 2010. The foundation of the group was three brothers - Charlie, Ronnie and Robert Wilson.

June 1982 marks the thirtieth anniversary of the release of their album The Gap Band IV. This Platinum selling album went to number 14 on the US Billboard Hot 100 (their highest ever performance on that chart over their career) and number 1 on the Billboard R&B Albums chart.


Side one opens with “Early in the Morning”. This first single went to number 55 in the UK, number 24 on the US Billboard Hot 100, number 13 on the US Dance chart, and number 1 on the US R&B chart. Robert Palmer covered the song in 1988. Opening with a crowing rooster, the track quickly dives into a driving mid-tempo groove that jams on for over six minutes. The chorus shows the wonderful vocal harmonies of the three siblings.

“Seasons No Reason to Change” slows things down with a plea to a lover to stay committed to the relationship. It has a very strong, synthesizer and piano foundation that flows through out.

The mid-tempo “Lonely Like Me” is about two forlorn people who find one another.

“Outstanding”, the third and final single from this album, went to number 68 in the UK, number 51 on the US Billboard Hot 100, number 24 on the US Dance chart, and number 1 on the US R&B chart. Written by one of the band’s drummers Raymond Calhoun, the lyrics sing the praises of a lovely lady. It also features horns by Andy Ward, Earl Roberson and Larry Stone.

Side two starts with the mid-tempo “Stay With Me”, another plea for togetherness. It reminds me a little bit of the Orleans hit “Dance With Me” from 1975 in melody and rhythm in spots.

The second single “You Dropped a Bomb on Me” went to number 39 on the US Dance chart, number 31 on the US Billboard Hot 100 and number 2 on the US R&B chart. I’ve always loved the synthesized effects on this one - the whistle of the falling bombs and the explosions. And how clever was that background vocal hook “aye-aye-aye aye-aye-aye-Armageddon”? This one was a big dance hit back in the day, especially at our high school socials during my Senior year.

Things slow down once more with jazzy “I Can’t Get Over You”. It opens with a long trumpet solo by Ronnie to set the mood. Charlie gets to do some soulful vocal runs on this one as well.

The album closes with “Talkin’ Back” opens with a very familiar alliteration exercise that, until today, I did not know the source of. You see, back in college in the mid-80‘s, my friends and I in the student orientation service (SOS) used to play a drinking game call “One Fat Hen, A Couple of Duck”. It turns out that many of that game’s rounds were derived directly the lyrics of this heavy funk groove. Color me pleasantly surprised.

For me, The Gap Band IV has a few standout tracks which are supported by very solid, very listenable cuts. Except for the two singles that crossed over into the Billboard charts with a lot of airplay, this album for the most part passed under my radar back in 1982. However, I am glad to have gotten to give it a spin now, even thirty years later, and plan to add a few more tracks from it to my music library.
Posted by Martin Maenza at 4:30 AM

Talking Back!!! Loved that song!!