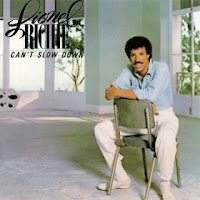 Happy sixty-third birthday today (June 20th) to American singer-songwriter, producer and actor Lionel Richie. The Tuskegee, Alabama, born and raised man started his career as a singer and saxophone player for the Commodores in 1968. In the early 80’s, he left the group and embarked upon a successful solo career.

On October 11th, 1983, he released his second studio album Can’t Slow Down. This multi-Platinum selling album hit the top of the charts all across the globe; it went to number 9 in Italy, number 3 in Norway and Switzerland, number 2 in Germany and Sweden, and number 1 in the UK (twice - once for a week in 1983 and then again for two weeks in 1984), Australia, Canada, the Netherlands and New Zealand.


It also held the number 1 spot on both the US Billboard Hot 100 (for three weeks, dethroning Quiet Riot’s Metal Health and then being dethroned by Michael Jackson’s Thriller) and the R&B charts. The album spent fifty-nine consecutive weeks in the Top 10 and a total of one hundred sixty weeks, over three years, on the Billboard Top 200 charts. It went on to win the Grammy Award for Album of the Year in 1985.

Side one kicks off with the title track “Can’t Slow Down”. The song features a traditional R&B groove that reminds me, in some ways, to Michael Jackson’s “Wanna Be Startin’ Something” (one of my favorite dance tracks from 1982).

“All Night Long (All Night)”, the first single from the album, reached number 2 in Germany and the UK, and number 1 in Australia and the Netherlands. In the US, it held the number 1 spot on the Billboard Hot 100, the R&B, and the Adult Contemporary charts. The music here is influenced by the sounds of the Caribbean, giving it an irresistible, festive beat.

It is time to slow things down a bit with the next track. The ballad “Penny Lover”, the fifth and final single, went to number 8 on the US Billboard Hot 100 and R&B charts, and number 1 on the Adult Contemporary charts. This was a slow-dance favorite back in my early college years.

As the fourth single, “Stuck on You” got to number 8 on the R&B charts, number 3 on the Billboard Hot 100 and number 1 on the Adult Contemporary charts. This ballad also went to number 24 on the US Country charts, thanks to the composition’s country-pop sound influences. This one takes me back to many end-of-the-night slow dances.

Side two begins with “Love Will Find a Way”, a mid-tempo jam about the optimism of the heart to get through even the most difficult times. It is the longest track on the album, clocking in at over six minutes. That gives Richie and his band plenty of time to work out the simmering, sultry groove.

“The Only One” is another slow ballad, this time a collaboration between Richie and composer David Foster. Foster also played bass and keyboards on the track (I can pick up those signature Foster traces through out).

The second single “Running With the Night” only made the top 10 in the UK (number 9), the Netherlands (number 8) and the US (number 8 on the Billboard Hot 100, number 6 on the R&B and Adult Contemporary charts). The song, with its urgent rhythm, features an electric guitar solo from Toto’s Steve Lukather.

“Hello”, the third single, held the number 1 spot in Australia, the Netherlands, the UK and the US (again, across the boards on the three major charts). This ballad too was a slow-dance main staple during the first few years after this album’s release. The moving video featuring Richie who has fallen in love with a blind sculptress is an 80’s icon.

Can’t Slow Down was a monster hit of a record, thanks to five chart-topping singles. Lionel Richie’s songs from this one where omnipresent during my freshman and sophomore years of college (1983 - 1984) - on the radio, out at the clubs and bars, and at many parties on campus. It is no surprise it sold over 15 million copies by 1986. I found this to be a very solid album and still one I can enjoy now nearly three decades later.
Posted by Martin Maenza at 4:30 AM