Pete Townshend - All the Best Cowboys Have Chinese Eyes 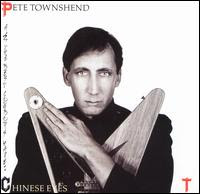 Today (June 14th) marks the thirtieth anniversary of All the Best Cowboys Have Chinese Eyes. This was the third solo album by English rocker and songwriter Pete Townshend.


Side one starts with “Stop Hurting People”, a combination of social commentary via poetry and anthem-fueled orchestration.

“The Sea Refuses No River” opens with Peter Hope-Evans on harmonica. The rest of the song is equally beautiful in an ironic way. The lyrics are related his dealing with his heroin addiction.

Next up is a minute-and-a-half “Prelude”, a simple track that starts out with just the musician and Virginia Astley at the piano. Townshend calls it a prayer for change in a world that has gone wrong.

“Face Dances Part Two”, the first single, stalled at number 105 on the US Billboard Hot 200. It did better though on the Mainstream Rock charts, topping out at number 15. This one is falls very much into a more pop sound than the usual rock we come to associate with him. Townshend has said that this one is about the soul in solitary confinement.

“Exquisitely Bored” opens with a guitar riff that mirrors the introspective nature of the song. It matches the whole “life is no longer giving me thrills“ theme of the song.

On the chorus of “Communication”, Townshend sounds like a stuttering Porky Pig. All kidding aside, on this one he emphasizes the important of actually speaking and listening in order to have a successful relationship.

Side two opens with “Stardom in Acton” which went to number 30 on the Mainstream Rock charts. The song is reflective of life in the west London district, Townshend’s home town.

“Uniforms (Corp d’esprit)” was released as a single and went to number 48 in the UK. The song has a high-fluting, sweeping march of a sound. The lyrics mock the superiority that many project with the uniforms they wear.

“North Country Girl” is a cover of a traditional folk song. Townshend infuses it with his signature guitar style and a catchy rhythm.

“Somebody Saved Me” is another song that reflects upon his drug problems and how someone stepped in the help him out. This is really a solid composition, made stronger by the personal nature of the lyrics.

“Slit Skirts” rose to number 41 on the Mainstream Rock charts. The lyrics reflect upon his marriage and how they struggled to hold it together as they got older. In some cases, though, that can turn into a nigh impossible task.

In the early 80’s, most of my exposure to Pete Townshend came from my brother who was a huge fan of the Who. However, if my brother had a copy of All the Best Cowboys Have Chinese Eyes, I certainly didn’t hear much of it from him. A few of these tracks might have crossed my consciousness from the album-oriented rock station I listened to on occasion from Buffalo but that is about it. Back then, I was looking for fun and dancing. This album is really more introspective and focused on serious topics. It would not have appealed at all to the seventeen year old me.

Listening to it today, though, as someone is his late forties and a good bit of life experience under my belt, I can appreciate the record more. I am intrigued by Townshend’s lyrical wordplay and acknowledge that the musical accompaniment is complex and well-crafted. I guess it is all just a matter of perspective.

I still can't tell you what the title means though.
Posted by Martin Maenza at 4:30 AM

Email ThisBlogThis!Share to TwitterShare to FacebookShare to Pinterest
Labels: 80's, All the Best Cowboys Have Chinese Eyes, music, Pete Townshend