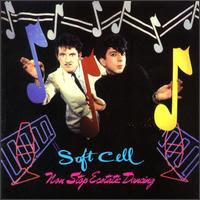 
Side one kicks off with "Memorabilia", my favorite track on this album. I guess it speaks to that collector mentality that I have. I like the catchy rhythm of this one with how it builds from the intro, along with the "Me-me-me-me-Memorabilia" aspect to the chorus. It gets stuck in your head very easily. The track was released in 1980 originally and hit number 35 on the US Dance Charts.

Next up is a cover of the 1964 Supremes song "Where Did Our Love Go?". I like the subtle change-ups to the music on this, giving it a synth make-over.

Completing this side is "What?", a song previously done by Judy Street. Clearly the guys have a love for classics and they do this one proud. This plea to a former lover is a great song.

Side two begins with the instrumental "A Man Could Get Lost" with its quirky intro. This one is all David Bell, a great spotlight for his musical skills. I could easily hear this being played in clubs back in the early 80's.

It is then followed up, on the US version of the album, with "Insecure...Me?" (the UK version repeats "Chips on My Shoulder" from Cabaret. It almost feels like an extension of the previous track, but then we get Marc Almond jumping in with his powerful vocals. I could see these two getting back-to-back club play.

Finally, "Sex Dwarf" makes a reappearance here from Cabaret to round out the album. The song is about the seamer side of the big city where all forms of sexual fetishes can be found.

I have been a big fan of group since my Junior year of high school. It was likely their number 1 hit "Tainted Love/Where Did Our Love Go" that first hooked me (this song is still one of my favorite 80's tunes today, especially as an extended mix version) and hearing other tracks by them on the nearby SUNY Fredonia college radio station that lead me to seek out their music on vinyl. I remember picking Non-Stop Ecstatic Dancing on vinyl back in 1982 from Record Giant store in the D&F Plaza. It also helped that my best friend at the time (John P.) was also into the band. He too picked up a few albums of theirs and we often listened to them when hanging out at his house.

In listening to this album again, I had to stop and think of why Soft Cell appealed so much to me back then. I have to perhaps attribute it to being a teenager, full of raging hormones and emotion, on the verge of discovering who I was as a person. These songs perhaps spoke to a different side of me, a side that was not the straight A honors student who spent his evenings and weekends studying. There was the social side of me that wanted to break out, to go out dancing and have fun, and to fall in love. And perhaps some of these songs were calling to that side.
Posted by Martin Maenza at 4:30 AM