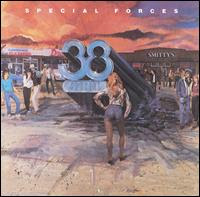 This month also marks the 30th anniversary of the release of Special Forces, the fifth studio album from Van Zant’s band 38 Special. The Platinum certified record went all the way to number 10 on the US Billboard Hot 200.


Side one opens with “Caught Up in You”, the first single from the album and the first number 1 for the group on the US Billboard Mainstream Rock chart. As a number 10 hit on the Billboard Hot 100, it was also all over the Top 40 radio stations and even on Solid Gold. The song was even featured in the 1983 film Spring Break though it did not appear on the soundtrack album. This one takes me back to the summer of 1982 when I was dating my first girlfriend. The song strong straddles the line of ballad and rocker; you could slow dance to it or just sit back chilling.

“Back Door Stranger”, a song about killer on the loose, is driven by the steady beats of Steve Brookins on drums and Don Barnes on guitar.

“Back on the Track” was the B-side to the third single. The lyrics tell of a guy who had rough teen years but is turning his life around. I like the strut to this one’s rhythm; it exudes confidence.

“Chain Lightnin’”, the third single, got some Mainstream Rock play and charted at number 9. The opening guitar solo along with the backing thunder sets the mood on this one. The song is full of the electric energy between two people who are sexually attracted to one another.

Side two begins with a little pedal-to-the-metal “Rough-Housin’”. This one has a rhythm that goes perfect with barreling down the high way with the windows down and the music blaring.

The second single, “You Keep Runnin’ Away”, barely broke the Billboard Top 40 (stopped at number 38) yet it did go to number 7 on the Mainstream Rock chart. The lyrics tell the tale of a woman who has had her heartbroken one too many times and taking off is her go to response.

“Breakin’ Loose” has a methodical rock sound to it as it weaves the tale of a guy who turns his back on a big successful career to find something more meaningful.

The life-on-the-road “Take ‘Em Out” keeps the swinging Southern rock coming. The band really gets a chance to jam on this one.

“Firestarter”, the final track, was also the B-side of the first single. This rocker is all about a girl who likes to stir up trouble and break hearts.

Back in 1982, 38 Special and the tracks from Special Forces were main-staples on the local album oriented rock station that I would listen to from out of Buffalo. Though this was music from the guys from Florida, we northern Yankees sure enjoyed them too. I think the tracks hold up pretty well after thirty years; good Southern rock never goes out of style.
Posted by Martin Maenza at 4:30 AM