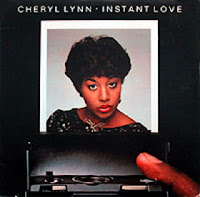 Today (June 11th) marks the thirtieth anniversary of the release of Instant Love, the fourth studio album from American R&B singer Cheryl Lynn. Produced by Luther Vandross, the record went to number 133 on the US Billboard Hot 200 and number 7 on the Billboard R&B charts. It also generated a pair of singles that did very well on the R&B charts.


The title track opens side one. “Instant Love”, as the first single, stalled at number 105 on the US Billboard Hot 200 yet it went all the way to number 16 on the R&B charts. The music is very representative of early 80’s dance music that mixed the classic funk elements of the 70’s with the more synthesizer sounds of the new decade. Lynn’s strong vocals really sell the love-at-first-sight posture of the lyrics.

The mid-tempo dance groove continues with “Sleep Walkin’”, an ode to nocturnal wanderings in the name of love. Listening to this one I find it very hard to resist swaying to the beat as a sit at my keyboard. Good thing the track is over six minutes long, allowing for the musicians time to work the rhythm.

Time to slow things down a bit. “Day After Day” opens with a flute that mirrors the song of birds in the morning. This one is full of such hope and anticipation of a better tomorrow, when love will come to those awaiting it.

“Look Before You Leap” brings back the mid-tempo rhythms again. Lynn sings about going into a new relationship with eyes wide open, to make sure one is truly prepared for such a deep commitment.

Side two starts off with “Say You’ll Be Mine”. This one has a definite throwback to Lynn’s disco days of the late 70’s.

“I Just Wanna Be Your Fantasy” is next. Like many of the earlier tracks, this mid-tempo number has a fine mix of funk and orchestration.

I like the beautiful piano accompaniment on the ballad “Believe In Me”. It allows for Lynn to showcase her voice.

The album closes with “If This World Were Mine” was originally recorded in 1967 by Marvin Gaye and Tammi Terrell on their album United. Here the ballad is done as a duet between Lynn and Vandross, two amazing vocalists that play perfectly off one another. This second single also fell short of the Hot 100 (it stopped at 101) yet it reached number 4 on the US Billboard R&B charts.

There is no disputing the musical production quality on Instant Love. Vandross does an amazing job with the musicians, laying down some smooth R&B grooves. Similarly, there is no denying that Cheryl Lynn has a wonderful vocal quality to her singing. She is equally adept at up-tempo numbers and the more emotional ballads.

My only real complaint with the record is that none of the original songs make an instant, lasting impression. You need something that pulls the listener back again. There are no lyrical hooks that get stuck in my head, which is not a great selling point for an album. This is likely the reason that this one might be a forgotten album by most music listeners from 1982.
Posted by Martin Maenza at 4:30 AM