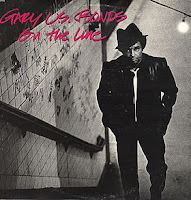 Happy seventy-third birthday today (June 6th) to American rhythm and blues singer Gary Levone Anderson, known best by his stage name of Gary U.S. Bonds. He started his career in the 1960’s and, after two albums, took a break from recording. In the early 80’s, he made a career comeback.

In June of 1982, thirty years ago this month, Bonds released his third studio album On the Line. This was the second of two albums that were produced by Bruce Stringsteen and Steven Van Zandt. The two E. Street Band members wrote eight of the tracks, and Bonds was also back by the classic rock group. The album produced one Top 40 hit single.


“Hold On (To What You Got)” kicks off side one. This is a straight-forward rocker about making it through tough times by clinging to those things and people that are most important to you.

The single “Out of Work”, which went to number 21 on the US Billboard Top 40, is next. The bouncy bop of this song about being unemployed gets my head moving every time I hear it. Clarence Clemons provides the saxophone solo here. This one definitely reminds me of the summer of 1982, cruising around town in my Mom’s Chevette with the windows down and the radio blaring.

Things slow down “Club Soul City”. Bonds is able to put his heart and soul into this smooth ballad about the heartbroken who drowned their sorrows in local bars.

“Soul Deep” was written by American country singer Wayne Carlson. This proclamation of love is a strong fusion of southern soul and classic rock.

Things slow down with the piano-prominent ballad “Love’s On the Line”. This one allows Bonds to spotlight his soulful side as he weighs out the options in a fading relationship. Joey Stann has the saxophone solo on this one.

Bonds co-wrote “Turn the Music Down” with Gary L. Anderson. This one has a lot of energy, a celebration of music and the freedom to listen to it. Bill Derby is the guitar soloist here.

Side two begins with “Rendezvous”, a story about a young couple getting together to spend some quality time together.

“Angelyne” originally was to feature Stringsteen in the duet with Bonds, but Columbia records forced them to remove the Boss’ vocals. Van Zandt stepped up to take his place.

“All I Need” is another slow jam.

“Bring Her Back” is another Bonds/Anderson collaboration. This one, with the rollicking piano played by Rusty Cloud, has a classic rock/Beach music sound. Stann plays saxophone on this one as well.

“Last Time”, written by Van Zandt, closes out the record.

On the Line has a lot going for it, thanks in part to the E. Street Band and their leader’s input on the record. Gary U.S. Bonds shows though that he still has the chops that made him a sensation two decades prior. Both tracks he co-wrote are favorites of mine here. All in all, this is one of those forgotten gems of the 80’s that deserves to be brought back out, dusted off and taken for a spin every now and again.
Posted by Martin Maenza at 4:30 AM