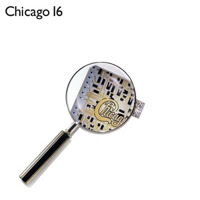 Thirty years ago, on June 7th of 1982, the American rock band Chicago released their appropriately titled sixteenth studio album Chicago 16. Produced by David Foster and featuring guest musicians from the band Toto, it went to went to number 44 in the UK and spent thirty six weeks on the US Billboard Hot 200, peaking at the number 9 slot.


Side one begins with "What You're Missing". As the third single, released in 1983, it only got as high as number 81 on the US Billboard Hot 100. Danny Seraphine’s steady drum beat comes to the forefront on this one.

"Waiting for You to Decide" is next. Its opening harkens back to the 70’s songs by the group and then shifts into a mid-tempo pop-rock rhythm.

The B-side to the second single was "Bad Advice". This one has a bit of a funkier side, both from the guitars and the horns. The vocals on the verses have a rough and tumble timbre to them, a welcome change to Peter Cetera’s usual higher register.

"Chains" opens heavy on the synthesizers but then scales back to a bare-bones guitar/percussion on the verses. It definitely changes up the sound across the three plus minute length of the song.

The first single from the album, "Hard to Say I'm Sorry / Get Away", went to the top of the US Billboard Hot 100 and Adult Contemporary charts. The song also went to number 1 in Canada, Ireland, Italy and Switzerland, number 4 in the UK, and number 6 in Germany. The song was also featured in the film Summer Lovers which hit theatres a month later. I remember this one got major airplay on the Top 40 station that I listened to. And even though it is a song that deals mostly with the failings of a relationship, this one was a huge slow-dance favorite in high school. Where the first half of the song is soft and gentle, the later half explodes with sound and fury. Together, they make a powerful composition.

Side two opens with "Follow Me". The band’s trademark horns of Lee Loughnane, James Pankow and Walter Parazaider are featured prominently here.

"Sonny Think Twice" was released on the B-side of the first single. This one about taking a moment to contemplate actions has a smooth jazz touch to it.

"What Can I Say” comes off as a light, fluffy pop piece with not a lot to distinguish it from the pack. For me, it falls into the filler category.

"Rescue You" attempts to recover things a bit. It bops along well enough, building to the chorus.

"Love Me Tomorrow", the second single, went to number 22 on the US Billboard Hot 100 and number 8 on the Adult Contemporary charts. The full orchestration on the verses contrasts perfectly the more rock tone of the chorus.

For me, Chicago 16 has some gems and a few missteps. What does work well for me though is the variety of sounds that end up complimenting on another on many of the tracks.
Posted by Martin Maenza at 4:30 AM