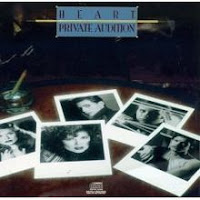 June 5th marks the 30th anniversary of Private Audition, the sixth studio album by the American rock band Heart. At the time, the group was made up of sisters Ann and Nancy Wilson, Howard Leese (guitar, synthesizer and more), Steve Fossen (bass) and Michael DeRosier (drums).

Although it spent fourteen weeks on the charts and reached number 25 on the US Billboard Hot 200, it was the first album from the band that failed to achieve Platinum sales status. It also went to number 21 in Canada and number 77 in the UK.


Side one opens with "City's Burning". The song charted at number 15 on the US Mainstream Rock charts. The song opens with a very strong acoustic guitar section by Nancy before exploding like a fireball of rock and roll. I like the energy and attitude on this one; it is reminiscent of classic 70’s Heart.

"Bright Light Girl" was the second single. It has a bouncy beat with a furious fusion of keyboards, guitars and drums. It is a good song; I am surprised it didn’t make any major chart penetration.

"Perfect Stranger" has the elements of a classic Heart ballad - sweeping guitars and soaring vocals.

The B-side of the second single was the title track "Private Audition". It opens as if someone is coming to try-out for a job. The song has a bit of a rollicking rag-time feel to it, making it sound a bit old-fashioned. However, the band pulls it off quite well.

Things slow down again with the ballad "Angels". The song, with its lullaby sound, is a tribute to Sean Ono Lennon who was only five years old when his father John Lennon was killed in December of 1980.

"This Man Is Mine", the first single, went to number 33 on the US Billboard Hot 100 and number 16 on the Mainstream Rock charts. This warning to all the women in the neighborhood to keep their hands to themselves is done as a homage to the Supremes.

Side two starts with "The Situation", another hard rocker with a number of sections where the band really gets to jam.

"Hey Darlin' Darlin'" is more of a pop song with an orchestra backing.

"One Word" continues the slower tempo, this time with a strong keyboard foundation. About mid-way through it shakes off the sleep feeling and builds to a musical crescendo.

"Fast Times" peels out like a sports car and barrels on at a rapid-fire tempo. Given the lyrics and the fact that the film Fast Times at Ridgemont High also came out the same year, I have to wonder if this song was one the band might have done for that soundtrack that got rejected. It just seems awful coincidental otherwise. Who knows? It is a good track though.

The final track "America" was the B-side of the first single. The lyrics of this slow-paced piece are set in the times of the US Civil War of the late 1800’s.

I can see why Private Audition struggled a bit on the charts. While the songs are good, for me there were only a few standouts that I’d be interested in hearing over and over again. Collectively the music is a bit of a mixed bag, tied together very loosely by the theme of performers auditioning of some producer or such.
Posted by Martin Maenza at 4:30 AM