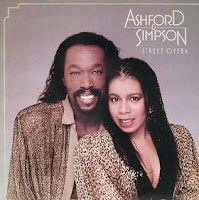 The American husband-wife R&B songwriters/singers Nick Ashford and Valerie Simpson started in the 60's writing for such artists as Aretha Franklin, Ray Charles, Marvin Gaye and Tammi Terrell, and Diana Ross. The extremely talented duo then transitioned to recording its own songs in the early 70’s.

This month marks the thirtieth anniversary of the release of Street Opera, their tenth studio album. This June 1982 release went to number 45 on the US Billboard Hot 200 and number 5 on the Billboard R&B charts. It generated a trio of singles.


Side one opens with "Love It Away" which, as a single, went to number 20 the US Billboard R&B charts. Ashford makes use of his falsetto range on this track about putting past indiscretions aside and moving forward with the future.

"Make It Work Again" deals with the complexities in a relationship; the goal is to find resolutions that include reconciliation. As a long-time married couple, Ashford and Simpson provided an interesting perspective on the love song genre.

"Mighty Mighty Love" extols the importance a solid relationship that is built over time. I like the combination of the powerful piano and the funky guitar on this one.

The third single "I'll Take the Whole World On" hardly made any noise on the charts. Though it too falls into the category of love songs, this one slows things down considerably over the previous three tracks, allowing the couple to get close and intimate.

Side two is a thirteen-plus minute musical suite entitled "Street Opera". It is actually made up of five musical movements that paint the portrait of the fragmentation of a black family.

"Working Man" begins the tale with a man who is unable to support his family. He concludes that he must leave them in order to look for work. The soulful saxophone underscores the reluctance of both the husband and the wife in this situation.

"Who Will They Look To" focuses on the wife’s message: that the children need their father for security and guidance.

"Street Corner" went to number 56 on the US Billboard Hot 100, number 9 on the Billboard R&B chart, and number 11 on the Dance Single chart. This up-tempo track discusses the influences of crime, drugs and prostitution in the inner city; they can appear to be an easy answer to the financial struggles yet inevitably complicate the situation further.

"Times Will Be Good Again" offers up a bit of hope in the story with the optimistic thought that the future will bring something better for the family.

"Working Man (Reprise)" closes out the side with a minute and a half bookend to the earlier song.

What I’ve always liked about Ashford and Simpson is how well they harmonize together. Having been together both professionally and personally for so long, the couple knows how to maximize each other’s strengths to make beautiful music. Their compositions also tended to have a bit more depth to them.

Around the time that Street Opera was climbing the charts, Ashford and Simpson made an appearance on the soap opera Guiding Light. Playing themselves, they showed up at a popular night club in the fictional Springfield to perform. I had just gotten into watching this soap during the summer of 1981, and I thought it was pretty cool to see artists I heard on the radio interacting with the cast as part of the storyline.
Posted by Martin Maenza at 4:30 AM