Rosanne Cash - Somewhere in the Stars 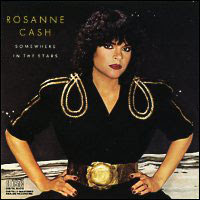 This month marks the thirtieth anniversary of the release of Somewhere in the Stars, the fourth studio album from Rosanne Cash. She is the eldest daughter of the late Johnny Cash and his first wife.


The first side starts off with the up-tempo “Ain’t No Money”. As the first single, it went to number 4 on the US Country chart and number 5 on the Canadian Country charts.

“Down on Love” is a song that questions a man’s intentions. His words are saying everything it takes to get a woman to sleep with him, but she is looking for that true, deep love connection that he is unwilling to provide.

“I Wonder”, the second single, hit number 8 on the US Country charts and number 14 on the Canadian Country charts. This one has a wonderful, old-fashioned feel to it with the simple piano and gentle guitar accompaniment. That allows for Cash’s shine.

The B-side of that second single was “Oh Yes I Can”. The song is one of sadness and feeling blue, but knowing that you can pull yourself out of it any time you want to. However, sometimes you just want to feel that way for a little bit longer.

“Looking for a Corner” reflects upon struggles at home and that finding one’s place is sometimes harder than just retreating to a corner where it is safe and non-confrontational.

Side two begins with “It Hasn’t Happened Yet”, a tale about a post-breakup where the woman finds her own inner strength. I like its empowering message. As the third single, it reached number 14 on the US Country charts.

“That’s How I Got to Memphis” features Cash’s father on guest vocals. The lyrics speak to how one will uproot their life to be with the person with whom they love.

“Third Rate Romance” was first recorded by the Amazing Rhythm Aces in 1975, released as the debut single from their album Stacked Deck. The lyrics tell of a one night stand between a singer and someone they met in a bar; the implication is that it not the first time of cheating for either.

“I Look for Love” is all about the games single people play when out on town, hoping to hook up with someone special. The song has a bit of desperation to it, especially that last line of “…they estimate their chances when the parking lot is empty…”.

The title track “Somewhere in the Stars” as served as the B-side to the third single. The lyrics tell of long-distance romance, where two lovers glance up at the same stars in the evening sky and are connected by them.
Posted by Martin Maenza at 4:30 AM