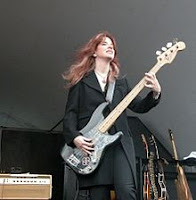 Steele began her career in music in 1975 as a member of the all-girl rock band the Runaways. She was the group's first bassist and performed along side Sandy West and Joan Jett, but she left the group before they recorded their first album.

For  the next seven years, she played in many Los Angeles bands. In 1983, she joined up with the Bangles.

For my review of their 1984 debut album All Over the Place, click here.

The Bangles also contributed to the 1985 soundtrack for The Goonies - click here for my review.

For my review of their 1986 follow-up Different Light, click here.
Posted by Martin Maenza at 4:30 AM

Email ThisBlogThis!Share to TwitterShare to FacebookShare to Pinterest
Labels: 80's, All Over the Place, Different Light, Micheal Steele, music