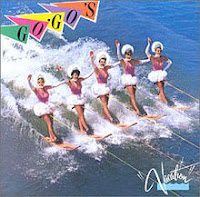 Coming off a big debut record the year before, in 1982 the Go-Go’s needed to prove the first time around was no fluke. Their second studio album, however, did not perform nearly as well as Beauty and the Beat. It only went Gold in the US, after peaking at number 8 on the charts, and produced only one Top-40 hit out of three singles.


Side one starts out with the title track and the first single “Vacation”. It spent nine weeks total of the summer of 1982 on the US Billboard charts, breaking into the Top-10 and reaching number 8. A water-skiing music video running all over MTV certainly helped sell the tune as well. The lyrics tell of a gal who needs to take a break from a guy, to spend some time alone. The timing of the single’s release was perfect as I remember it being very popular during that two months break period between my junior and senior years of high school. For me, it will always summon up memories of that time period, my driving around in my Mom’s Chevette (which would eventually be my first car) with the windows down and the radio turned up.

“He’s So Strange” charted at number 46 on the US Mainstream Rock charts even though it was not released as a single itself. It has a 60’s surf groove to it ala Dick Dale that I find very appealing, with just a little touch of the B-52‘s thrown in for good measure too. The lyrics talk of a guy who has so captured the woman’s heart and mind that she loses all track of time. I’m kind of surprised it didn’t do better on the charts than it did.

“Girl of 100 Lists”, the third single in the UK, carries a new-wave sound to it that is catchy. The lyrics however are not so inspiring; they seem very self-absorbed as singer Belinda Carlisle ticks off things in her day. Jane Wiedlin penned this one, so it kind of disappoints me (seeing as she was always my favorite Go-Go).

“We Don’t Get Along” opens with rocking guitars (by the song’s writer Kathy Valentine, Charlotte Caffey and Wiedlin) and drums (by Gina Schock). I do like this one; it has a high energy level and plenty of attitude.

“I Think It’s Me” is next, a Caffey/Carlisle collaboration. It is a pretty decent tune with a nice beat, a solid hook and good lyrics.

The last track on the first side is “It’s Everything But Partytime”, a Schock/Wiedlin collaboration. The tempo is a bit slower and gives an indication that things were not so rosy in the valley of the Go-Go’s. Even if it wasn’t meant to be referential to the problems the group was starting to have, it certainly seems that way looking back on it. It isn’t a bad track; it is just something a little darker, musically, than what I would expect from the band.

The second single, “Get Up and Go”, hardly did that at all. It only charted in the US and, even then, only got to number 50 on the Hot 100. It even had an interesting video that ran on MTV. And that is kind of sad to me as this is my favorite track from this album. I like the tribal beats from Schock, making this a fantastic dance track. We used to love dancing to this one back in the day because of its high energy level.

“This Old Feeling”, like the previous track, is a Caffey/Wiedlin collaboration. It was released as the third single in most markets, though it failed to make any chart waves here in the US. It is an okay song; I don’t think it is as good as the previous track obviously. It might be the tempo (again, slightly slower).

“Cool Jerk” was written by Donald Storball and originally recorded in 1966 by the Capitols; it reached number 2 on the US R&B charts and number 7 on the pop charts. The song describes a dance made popular at the time. The Go-Go’s give a nice spin to it being an all-female band. Caffey really shines on keyboards on this one. I really like what the group did with it, enough so that it is my second favorite track from this disc.

“The Way You Dance” is next. It is a good middle of the road song for the band, not hit-potential but not bad either. Good to fill sets.

Schock again gets to shine on “Beatnik Beach”, another 60’s surf sounding track. This one is a really good track and probably got a bit more exposure thanks to being the B-side of the “Vacation” single.

“Worlds Away” ends the record on a slower note, another from Wiedlin/Valentine. I’m not a big fan of this one either. It is an okay song, but I find it to be just a little too boring.

This is another early 80’s record that I was mostly familiar with through the hit singles. Being in high school at the time and having my license, my extra cash was going to fill the gas tank and not buying as many albums. Still, listening to the entire album again today I can see why Vacation might not have done so well as the debut. It has some high points but a couple misfires too. It can be really hard coming off of a big debut record, and thus that sophomore slump smacks you right in the behind. Be that as it may, this album from the Go-Go's fits right at home in my 80's music library.
Posted by Martin Maenza at 5:25 AM

I liked the Go-Go's best of all
80's all female groups. There were a lot of them back then.

Paul, there were indeed a lot of girl groups in the 80's - expect to see more of them cropping up in posts in the future. So many albums, so little time...

paul, i like your review but just wanted to correct a few minor points.

"he's so strange" was not the 3rd and final single. in fact, it wasn't released as a single at all. the 3rd single from vacation in the US was "this old feeling" and the 3rd single in the UK was "girl of 100 lists"...

Joe, FYI my name is Martin - thus the name of the blog being "Martin's View". Anyway, thank you so much for reading and taking the time to point out the errors that crept in. They have been corrected. I really appreciate your help. Keep reading!