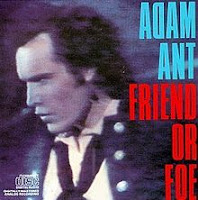 After a third album and disbanding Adam and the Ants in early 1982, Adam Ant (born Stuart Leslie Goddard) went out as a solo artist. His first, and most successful to date, solo album was Friend or Foe which was released October 11th, 1982.  It went to number 5 in the UK.

Thanks to the growing market of music videos on MTV, he was able crossover to the US and gain a larger following. Here in the States, the album went all the way to number 16 on the Billboard 200. The record was certified Gold in both the UK and the US.


The title track “Friend or Foe” kicks off side one. This second single went to number 9 in the UK. It opens with Martin Drover on the trumpet, heralding a new era of Ant music. The drum beat by Bodgan Wiczling and the guitars by Marco Pirroni and Adam set the rhythm nicely. The lyrics are all about getting to know a person for who they are and making up your own mind about what you think of them (and not be influenced by the opinions of others).

“Something Girls” has a little of a country-western saunter to it. It celebrates the fact that every woman has something to offer, you just have to be open to seeing what that something is.

“Place in the Country”, my second favorite track from the album, has a classic feel from the early days of rock ‘n roll. The swinging rhythm really gets my feet tapping. I really like that "oooo oo oo oo oo" part before the chorus.

The third and final single was “Desperate but Not Serious”; it didn’t perform nearly as well as the other two - going to number 33 in the UK and only number 66 in the US. Again, amazing opening trumpets on this one. The lyrics are once more very personal, making an attack back at the media who are always trying to infer Adam's stage persona is a reflection of his personal life.

“Here Comes the Gump” is all about the rise of fame and how others start to look at you. The song has a steady tribal beat to it.

A cover of the Door’s “Hello, I Love You” closes out the side. That classic band took the song to number 1 on the US charts in 1968. The lyrics are all about trying to get the attention of an aloof, high class woman. Adam’s version emphasizes the drums and guitar aspects more, making it a refreshingly different take on the classic.

My favorite song on the album and one of my favorite songs from that year “Goody Two Shoes” is next. I know these lyrics by heart and sing along to it every time I hear it. The song was the first single from the album; it went to number 1 in the UK and number 12 in the US - number 7 on the US Mainstream Rock charts. The lyrics directly reflect Adam’s frustration with the press intruding upon his life; the very sex-charged video further reinforces that. The super-catchy music makes this a fantastic dance tune to boot. This was a guaranteed mood raiser back in the day, and it still does the same thing to me almost thirty years later.

“Crackpot History and the Right to Lie” is another one of those over-looked tracks from this record. The local college station played it a lot. The lyrics continue to reflect on Adam's career in the public eye, and how often as time goes by events get re-interpreted by the media. This one too has a nice rhythm and powerful horn section.

“Made of Money” is a straight-forward statement that that there are people out there that are looking to hook-up with someone for their perceived wealth. But, as the first verse points out, the joke is on them.

“Cajun Twisters” incorporates a line from the children’s story “Little Red Ridinghood” over and over in this one. It seems to imply that if you work so hard to get known and recognized that you really cannot complain when your privacy is no longer your own.

“Try This for Sighs” is a fun little play on words for a title. It shows Adam’s playful side.

“Man Called Marco” is a nice piece to showcase the guitar talents of Marco Pirroni, a long-time friend of Adam's and fellow Ant member.

Friend or Foe was very popular in the final half of my senior year of high school and the first half of freshman year of college (1983). I recall dancing a whole lot to “Goody Two Shoes” at dances, bars and floor parties.

I also remember those first few months of college when I was dating a photography major named Suzan who was obsessed with Adam Ant. She actually had pages of photo albums full of still pictures she took of him from videos that had been playing on her television. Okay, that was a bit odd but I wasn’t about to judge. The relationship didn’t last but a month though (to borrow a song title, she may have been desperate but not serious). Besides, how it the world could a scrawny computer science major compete with the likes of Adam Ant?    ;)
Posted by Martin Maenza at 5:24 AM

"Desperate but Not Serious" is a musical classic.