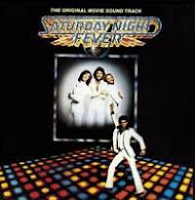 This time we’re jumping back to the late 1977 released album that sold over 15 million copies world-wide, that stayed atop the album charts for twenty-four straight weeks from January to July of 1978, and stayed overall on the Billboard album charts for a total of one hundred and twenty weeks (until March 1980). Coincidentally, it was the record that dethroned yesterday’s reviewed album Linda Ronstadt’s Simple Dreams from its number one album perch. This soundtrack even was ranked in Rolling Stone magazine’s Top 500 Albums of All-Time, coming it at position 131. Of course, I am talking about Saturday Night Fever.


As I mentioned last week, growing up I often went to the movies with my slightly older cousin Joan. She was a huge John Travolta fan (faithfully watched Welcome Back, Kotter each week, had a life-sized Travolta poster on her bedroom door, and even had his debut record album from 1976). When this film came to our small town theatre in early 1978, there was little doubt that we’d be seeing it. And even though it was rated R and I had just turned thirteen that week, we saw the film on the evening of Friday February 24th. She was there for Travolta; I was there for the dancing and the music.

A few weeks later, our whole family (my parents and brother, her parents, her sisters, their husbands, our grandmother and great aunt) got together to celebrate the birthdays of my father and I (it was a few weeks late for me, a week early for him). One of the presents I received that year was this soundtrack album on vinyl which, back then, was a pretty expensive gift. Double-albums tended to run close to $20. I was in pure disco heaven for weeks on end after that. Over a decade later, when my turntable had given up the ghost and I was getting in CDs, this was one of the first discs I picked up to start my collection. To say I have much appreciation for this album would be an understatement.

Let’s take a look at the four sides that make up this iconic record.

Side one is dominated by the presence of the Bee Gees. They had been working on their own solo album when they were approached to contribute music to this film. As such, this album is a key part of their discography and it helped revitalize their music nearly two decade long career. It was only proper that they are featured on the front cover of the album. The whole side is a solid four-star rating in my iTunes library. Not a bad song in the bunch, in my opinion.

“Staying Alive” was not intended as a single, but fan requests for the song, due to appearing in the film’s trailers, was enough for it to be released on the charts in December of 1977. By February 1978, the song had reached the number one spot where it stayed for four weeks until sibling Andy Gibb bumped it down to number two. I really like the opening guitar on this - it inspires me to get up to get down (and boogie). You get that confident strut going, much like the Tony Manero (Travolta) character in the opening of the film where this song is featured. Back in the day, I would dance around my room to this one - practicing steps to the hustle and the bus-stop. The harmonies on this one are amazing, especially with Barry doing his falsetto for a majority of the song.

“How Deep Is Your Love” was the first single released from the film and reached the number one spot by Christmas of 1977. It held that spot into the new year for three weeks. This song is just speaks right to my soul - the emotion, the harmonies, the melodies - it all creates the perfect pop song. Given how well it performed on the charts, I’m sure this is a sentiment I shared with a good portion of the populous.

“Night Fever” was the third single from the film, released in February and reaching the number one spot in March (bumping Andy down to number five while “Staying Alive” held fast at number two). This one has an infectious guitar bass and a cascading keyboard line. The layering of all of the musical elements on this one is brilliant. Add the vocals and you’ve got a disco masterpiece.

“More Than a Woman” was not released as a single but is still one of the Bee Gees’ more popular songs. Once more, Barry uses the falsetto vocals to carry the lead. I find it fascinating that he could sing in this range for such a long time. I heard a number of these songs in concert back in 1979 and can vouch to the fact that this wasn’t just studio magic; he was that versatile of a singer.

Yvonne Elliman closes the side with her smash hit “If I Can’t Have You”. The Bee Gees originally planned to include it on their 1976 album but instead gave it to the Hawaiian born singer (who was most known at that point for her role as Mary Magdalene in the Jesus Christ, Superstar). The single was released in March of 1978 and bumped “Night Fever” from its number one perch in May. Yvonne’s voice fits nicely with the melodies on this one. It is a song I often associate with Junior High school crushes - that feeling of watching someone from across the room but feeling too shy to approach them to say what is really going through your mind.

Side two opens with the sweeping “A Fifth of Beethoven” by Walter Murphy. This disco instrumental adapts the first movement of Beethoven’s 5th Symphony. It actually was a number one Billboard hit from July of 1976. I really enjoy how this one takes the classical foundation with the full orchestration and adds the disco elements (beats, keyboards and other rhythm effects) to take it a whole new level. The album version is only three minutes long; the extended dance version is even more amazing.

“More Than Woman” makes its second appearance on the record, this time performed by the R&B/soul band Tavares. Their version was released as a single but only stayed in the top 40 for four weeks, topping out a number 32. I really like how their take on the song differs from that of the Bee Gees; the vocal harmonies are in a bit lower of a range and their added elements in the chorus are nice touches.

David Shire, who composed and adapted much of the film’s incidental music, provides the track “Manhattan Skyline”. The song very much captures the feel of the city. Listening to it I can envision moving through the concrete canyons of the Big Apple, in search of that high energy night spot where you can dance until dawn.

The nearly eight minute long “Calypso Breakdown” by Ralph MacDonald closes the side. Its syncopated Caribbean rhythms are a nice way to change things up a bit from the traditional disco beats presented so far on the record.

Side three begins with David Shire’s “Night on Disco Mountain”. This is another marriage of classical orchestration with disco elements; this time with the foundation being Russian composer Modest Mussorgsky’s “Night on Bald Mountain”. The disco beats brighten up the traditionally dark and moody piece.

Kool & the Gang provided the track “Open Sesame” to the film. The Arabian feel of this song helps it to stand out against the other tracks. The horns on this one carry a good portion of the musical load.

The Bee Gees return with “Jive Talkin’”, a number 1 hit from their 1975 album Main Course. Ironically, the song did not appear in the film. It appears that it was instead brought in to fill out the record with another proven chart success. This one has an amazing driving rhythm to it that I find pretty hard to resist.

The Brothers Gibb make one final appearance on this record with “You Should Be Dancing”, a number 1 hit from their 1976 album Children of the World. I take the title to heart. When I hear it, I think “why, yes, I should be dancing…” Again, another irresistible song for me. Like so many of the songs on this record, it takes me right back to the scenes in the film and the amazing choreography by Deney Terrio and others. And, yes, I did watch his show Dance Fever regularly after seeing this film. I would have been happy to dance a fraction as well as anyone in the film or on that show; what my dancing lacks in precision and grace it makes up for in enthusiasm and effort.

The side ends with “Boogie Shoes” by KC and the Sunshine Band. It was originally released as a B-side to the single “Keep It Comin’ Love” in 1977; due to the success of the film it was released as a single on its own in 1978. It only lasted three weeks in the top 40 though, attaining the position of 35. KC and his posse always sounded like they were a party-in-motion. This song, while simple in lyrics, has a solid groove that is fun to dance to.

Side four starts off with the third piece by David Shire - “Salsation”. This instrumental has a Latin influence to it. That is one of the things I like about this soundtrack; the diversity of styles and approaches demonstrate that disco music could be very multi-faceted. That’s why I find this genre so interesting. Too often people discount disco completely, but it truly has merits.

MFSB, a collaboration of studio musicians known for many hits during the 70’s, provide “K-Jee”. The band shows how their famed Philadelphia sound could adapt this 1971 instrumental by the Nite-Liters to the disco scene. I have to admit this is probably my least favorite track on the album.

Finally, the album ends with “Disco Inferno”, an epic eleven-minute production by the Trammps. The introductory chords were just the right length to get people up and to the dance floor before the vocals kick in. And it has that memorable chorus - “burn, baby, burn” and “burn that Mother down”. I really love how this track goes into an extended jam at the four and half minute mark until the time for one final chorus near the end. This was a great number to throw on while working out your dance moves. The song spent thirteen weeks in the top 40 and nearly made it to the top 10 (its blaze up the charts was extinguished at the number 11 spot).

So, if you love dance music and enjoy hit disco tunes in particular, this record needs to be in your collection.

If you love the 1970’s and all the different varieties of sounds that made that decade memorable, this record needs to be in your collection.

If you love movies and enjoy having the music that goes along with them, this record needs to be in your collection.

Hey, fifteen million people (and counting) can’t be wrong, can they? ;)
Posted by Martin Maenza at 8:21 AM

You have inspired me to rent this movie again. I try to watch it every few years when the mood strikes me, and so to the top of my netflix que it goes (just after Tangled and just before Dr Who: An Unearthly Child).

I love all the Beegees song in this film, and the story is so cheesy that you can't help but love it.

I pull out my DVD every now and again to give it a watch. I put the film back into the context of when it came out. Sure, it was a rather simple story but it worked. It was relatable.