Blue Nile - A Walk Across the Rooftops 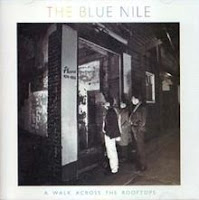 A Walk Across the Rooftops is the late 1983 debut album from the Blue Nile, a pop trio from Glasgow. All three guys do duty on synthesizer. Robert Bell also plays Bass. Paul Joseph Moore plays additional keyboards. Paul Buchanan handles all vocals as well as guitar. For the songs that include drums, Nigel Thomas provides those.

Until this past weekend, I had never heard this album. However, this album was on the 1001 Albums You Must Hear Before You Die list so I sought it out online to see what I thought of it.

Side one opens with the title track. “A Walk Across the Rooftops” has a melancholy feel to it. I get the imagery of a very late at night/pre-dawn time of reflection, up above the sleeping city below.

“Tinseltown in the Rain” has a little more movement to the music, but it too has a sense of regret to it as a love comes to an end. It is a beautiful sounding song though.

“From Rags to Riches” has an interesting synthesizer-drum rhythm to it. I like the vocals on this one.

I can say the same thing for the next track “Stay” which opens side two.

“Easter Parade” slows things down again. The band clearly know what works for them - solid piano arrangements and soul-exploring vocals.

“Heatwave” provides another example of the amazing sounds these guys can produce with synthesizers. The music has complex elements to it - almost sounding like exotic instruments. But it is all produced with amazing results.

“Automobile Noise” closes the record on a slower note. As the beginning did, I get the feeling of a late night alone with the sounds of the occasional passing cars cutting through the stormy darkness.

If I had ever heard any of the tracks from A Walk Across the Rooftops, it was likely on some alternative radio station at the college, and the songs never really registered with me. As for Blue Nile as a group, I have one song in my library from their 1996 album Peace At Last - until today I never knew they got their start in the 80’s.

Overall, I have to say I found this a pleasant listen. The record has a more gentle synth-pop sound that is easy on the ears. It is the type of music that quietly demands you sit and give it a listen.
Posted by Martin Maenza at 5:18 AM

I have the cassette version of the Blue Nile's "Hats" album from 1989 somewhere stashed away. That was my only exposure to this band, and I don't remember listening to it very much.
As I listen to "A Walk Across the Rooftops", I detect a very similar sound to the "Hats" album. Thanks for the review.