Rachel Sweet - Blame It On Love 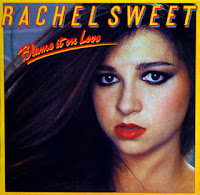 This month we celebrate the thirtieth anniversary of Blame It On Love, the fourth and final studio album from Rachel Sweet.

After its release, the then-twenty Sweet took a break from the business to resume her education, graduating from Columbia University with a degree in French and English Literature.


Side one opens with the first single “Voo Doo”, which climbed to number 72 on the US Billboard Hot 100. The guitar opening is cool, followed by Sweet’s mesmerizing vocals. I remember this one from the radio and the early days of MTV back in 1982. I lost it again for about a decade until I picked up a Rhino Records compilation of early 80’s new-wave that included this track.

“Paralyzed” mixes it up with a slower verse and a slightly faster chorus. Like the first track, this one speaks to being caught up in the power of love and finding one’s self out of control.

“Sticks and Stones” features a funkier edge to it thanks to the percussion and bass lines.

“American Girl” was the B-side to the first single. Sweet tells the tale of a young woman who gets all made up to go out dancing and find someone so she can forget her troubles. The lyrics really question where the innocence has gone to when youth grow up too fast.

The opening of “The Heart Is a Lonely Hunter” brings to mind vast, wide-open expanses of barren land in the US Midwest. The lyrics then contrast it with an urban tale of someone on the prowl at night, looking for love.

Side two begins with the title track. “Blame It On Love” opens with some spacey guitar reverb but settles into a hard rocking beat. The lyrics tell of throwing caution to the wind and giving in to passion, and if things don’t work out you can blame it on love. What 80’s teens couldn’t relate to that? I think this one should have been released as a single too as it is a solid song.

“Hearts On the Line” easily could have been done in a country style, for which Sweet got her start with in the late 70’s. With the right tweaks of guitars and synths though, it moves perfectly into an early 80’s rock style.

“Cruisin’ Love” kicks up the beat with this song about those nice girls in school who are secretly yearning to go out driving with a hot guy and parking somewhere to make out.

“Cool Heart” too has that country-rock blend.

“Baby Blue” closes out the album with a gentle ballad powered by Sweet’s soaring voice.

Blame It On Love is a very solid record. Rachel Sweet has an amazing voice and the music is right in line with the rest of the pack during that time period of the early 80’s. If one liked Scandal, the Motels or Pat Benatar (as I did), then this record would have been right at home in their collection. At age twenty, Sweet still had her pulse on the late teen audience and wrote songs that would appeal to that demographic while avoiding bubblegum sweetness in the music.

Sadly, the record label does not see the strength of this album. It is not available for download anywhere from the usual sources (iTunes, Amazon, emusic). If you want hard to find music, sometimes you have to go old school. I ended up seeking out a CD of the album (found a double-set from 2005 that included this album and her 1981 together on a single disk).
Posted by Martin Maenza at 4:30 AM

Check out my Rachel Sweet Spot page on Facebook. I interviewed the producer of this album, Marc Blatte.Very interesting read about the making of this album.
https://www.facebook.com/RachelSweetSpot