Bruce Hornsby and the Range - The Way It Is 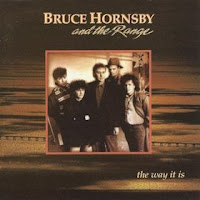 On August 1st, 1986, Hornsby and his band the Range (David Mansfield on guitar/mandolin/violin, George Marinelli on acoustic guitar, Joe Puerta on bass, and John Molo on drums) released their debut album The Way It Is. The multi-Platinum seller went to number 3 on the US Billboard Album chartand number 15 in the UK. Along with a number of successful singles, the album helped win the group the Grammy Award for Best New Artist in 1987.


Side one begins with "On the Western Skyline", a track that became a favorite on the US Billboard Album Rock Tracks chart. The song has a wonderful melody and some catchy guitar and vocal hooks that instantly pull the listener right in. When I hear it, I can picture the sun setting at twilight across a large body of water, much like the album’s cover.

The third single "Mandolin Rain" reached number 4 on the Billboard Hot 100, number 2 on the Album Rock Tracks, and number 1 on the Adult Contemporary charts. It also crossed over to the US Billboard Hot Country Singles chart and peaked there at number 38. It charted in the UK at number 70 and number 14 in Canada. The sadness of the break-up told in the lyrics is mirrored by Mansfield’s performance on the title instrument.

"The Long Race" closes the side on a bit more of a mid-tempo note. The lyrics tell of a dedication to achieving a desired future.

Side two opens with the title track. "The Way It Is" was the second single from the album; it went to number 1 on both the US Billboard Hot 100 and the Adult Contemporary charts. Around the globe it went to number 23 in New Zealand, number 16 in Germany, number 15 in Switzerland and the UK, and number 1 in Canada and the Netherlands. The lyrics take a snapshot of America during the 1980's, focusing on the economic divides and civil rights.

"Down the Road Tonight", with its sauntering melody, features guest-star Huey Lewis on harmonica and backing vocals.

The fusion of rock and country is prominent in the mid-tempo "The Wild Frontier", between the guitars and the fiddle.

"The River Runs Low" paints a detailed picture of abandonment, juxtaposing the imagery of draughts both natural and emotional.

"The Red Plains", the B-side track to all three singles - albeit the third time it was a live version, closes out the album.

I was on the second half of my college years when The Way It Is was released. While I was very familiar with the singles thanks to Top 40 radio airplay, this was the first time I had listened to the rest of this debut album. I definitely enjoyed the wonderful melodies in these nine songs as well as the musical layering of the various instruments. It is a relaxing, easy-listening kind of record that I think holds up quite well after over twenty five years.
Posted by Martin Maenza at 4:30 AM

One of my favorite albums and the second CD I ever bought. Great stuff!