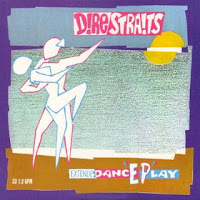 Today (January 10th) marks the thirtieth anniversary of the release of Extendedanc
EPlay, the first extended play from the British rock band Dire Straits. In some markets it was known by the title of the first track - Twisting By the Pool. The UK version featured three tracks totals. The US version, which went to number 53 on the Billboard Hot 200, featured four tracks. It was the first record with drummer Terry Williams joining the group; he replaced the departed Pick Withers.


Side one begins with "Twisting by the Pool". As a single, this up-beat song went to number 31 in Germany, number 18 in Canada, number 14 in the UK, number 13 in Ireland, number 11 in Italy, number 6 in Norway number 2 in Australia, and number 1 in New Zealand. Here in the US, it stalled at number 105 on the Billboard Pop charts yet went to number 12 on the Mainstream Rock charts. Keyboardist Alan Clark goes to town on the piano hooks on this one. It is definitely a fun one which deserved to be a bigger hit here in the States.

On the US version, this side also included "Badges, Posters, Stickers, T-Shirts". The track was an outtake from the Love over Gold studio sessions; in the UK it was used as a B-side for a single. It features an up-tempo jazz swing to it, complete with Mark Knopfler scatting.

Side two opens with "Two Young Lovers", the story of a couple that goes from the start of its courtship through marriage. Mel Collins is featured on the saxophone here.

"If I Had You" closes things out with a song of promises in the name of love. I like how the lyrics quote Muhammed Ali and name-drop a few famous couples from the funny pages.

I always enjoyed about the EP format in the early 80's because it delivered a decent sampler of music without a lot of filler. We see that here as ExtendedancEPlay delivers four solid songs.
Posted by Martin Maenza at 4:30 AM

Dire Straits are one of my favorite bands of all time. I saw this EP just once when it was out on the shelves, on cassette at what I think was a Musicland in downtown Minneapolis, and I bought it. It was the first EP I ever bought and I didn’t even know what that properly meant.

Falling between “Love Over Gold” and “Brothers In Arms” I think this EP is a remarkable look into the style of Mark Knopfler and the band on the cusp of something major. “Love Over Gold” was a nearly operatic effort showcasing the 14 minute Telegraph Road on the first side, the radio hit Industrial Disease on the back (and in my opinion the best b-side of the band’s career in It Never Rains). The first four studio albums showed growing subtlety and complexity but it wasn’t until “Brothers In Arms” with the mega hits of Money For Nothing and Walk of Life came out that Dire Straits became a global phenomenon. And in that strange sweet spot between massive radio hits and songs that would only find airplay late at night or on college radio falls this quirky EP.

I find the overall success of the EP a little strange but a solid herald of what is to come in terms of their popularity. I had the US version where the B Side was filled with the two jaunty and upbeat cuts Two Young Lovers and If I Had You as you mention, both of which show strains that recur in later songs, such as Song For Sonny Liston many years later and the jazz influenced cuts like Your Latest Trick from “Brothers In Arms”. Twisting By the Pool, as a song, has some remarkable legs. I heard it at a MW Wild hockey game just a year or two ago. It also made an appearance on both the Dire Straits best of compilations (the now deleted “Money For Nothing” and current offering “Sultans of Swing”). I think that song is using the same tongue in cheek approach to consumerism that the song Money For Nothing used only a couple years later to such great acclaim.

The inclusion of Badges, Posters, Stickers, and T Shirts is a low point for me in their catalog, right next to Les Boys from “Making Movies”. I get the humor of it as Knopfler lampoons the concert going experience, it just isn’t their best work musically.

While the EP doesn’t do much, if anything, to show the fantastical prowess and tonality of Knofpler’s guitar wizardry, it does show off his sense of humor, his ability to write songs about relatable characters, and that the band was versatile with its new players. Also, I love the cover art. I bought the 12” on eBay a few years back just to have the art.

Your review is really solid and I appreciate all the extra information regarding chart position and that Badges… was a studio session cast off (which makes perfect sense). Thanks for looking this one over Martin! It is a nearly forgotten work.