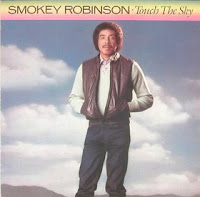 In January of 1983, Motown legend Smokey Robinson released Touch the Sky, his twelfth solo studio album. It charted at number 50 on the US Billboard Hot 200 and number 8 on the US Billboard R&B charts. Today, we will look at this one to celebrate its thirtieth anniversary.


Side one opens with the title track. "Touch the Sky" was released as the second single; it stalled at number 110 on the US Billboard Pop charts and number 68 on the Billboard R&B charts. The lyrics of this mid-tempo track encourage one to bounce back from a bad relationship and give a new one a chance.

"Gimme What You Want" is next.

"Even Tho'" first appeared as the B-side to a single in 1982 for Robinson's previous album. This ballad of regret was written by Forest Hairston.

With a gentle swaying beat, "Gone Again" speaks to times of separation between a couple, both physical and emotional.

Side two starts with the declarative "All My Life's a Lie". The man finds out that his lover has been unfaithful and he is embarrassed to be the last to know.

"Sad Time" has a melancholy melody with sorrowful saxophone.

"Dynamite" also has a laid back, gentle rhythm to which Smokey can croon seductively. His style is so approachable and non-threatening; you hardly realize he is talk about explosive sex.

The album closes with "I've Made Love to You a Thousand Times", a sensuous song about total infatuation. As the first single, it stopped at number 101 on the US Billboard Pop charts yet climbed all the way to number 8 on the Billboard R&B charts.

The currently out-of-print Touch the Sky is very much an easy listening record, perfect for Smokey Robinson’s quiet storm vocal styling that he mastered in the late 70’s and early 80’s.
Posted by Martin Maenza at 4:30 AM