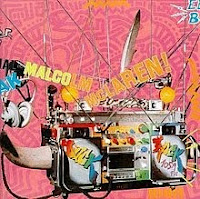 This month marks the thirtieth anniversary of the release of Duck Rock, the first album by British impresario Malcolm McLaren. Today (January 22nd) also would have marked his sixty-seventh birthday, however he passed away back on April 8, 2010.

To pay tribute, today I present my review of this album (click here for that).
Posted by Martin Maenza at 4:30 AM