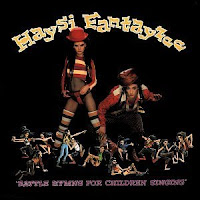 Happy fifty-first birthday this week to English DJ and singer Jeremy Healy. In the early 80’s, he was one half of the pop duo known as Haysi Fantayzee; his partner was singer/photographer Kate Garner. The group, however, had a third rarely seen member as well. Paul Caplin (Kate’s then boyfriend) played all the music for the group.

After a number of successful singles in the UK in late 1982, they put out their sole full-length album in early 1983. Battle Hymns For Children Singing, a title which Healy made up on the spot during a radio interview, charted at number 53 in their native UK. Thanks to a quirky video on MTV, they also sold albums over on this side of the pond. Today we will give this one a listen to celebrate its thirtieth anniversary.


Side one starts with “Shiny Shiny”. As the second single, this song hit number 16 in the UK. I remember this one from high school dances; the carefree music counterbalanced the lyrical post-apocalyptic message of dressing up to party after the bombs have dropped.

“I Lost My Dodi” tells the tale of a man who finds his family has been killed by murderer on the loose. As with the first track, it counters the negative with a bouncy up-beat rhythm.

“More Money” is a straight-up story of greed and the excesses of the wealthy, backed by an infectious drumbeat. Garner’s singing on the chorus is tribal chant-like.

The sultry and mysterious “Sabres of Paradise” was the B-side to the first UK single. The lyrics tells of a woman open to any and all experiences, be they physical or chemical. The music and Healy's vocals have a bit of a hypnotic effect that pulls you into a downward spiral.

Side two begins with “Sister Friction”, a track which hit number 62 on the UK charts as a single release. The percussion and the guitars grind together on this sexually charged song for a cool effect.

“Shoofly Love” typifies the group’s use of what many labeled nonsense lyrics. This one about making love has a hoe-down, country flavor to it. For the final couple minutes, it bridges over to a primitive, world-music beat.

“Chizoola” moves things around to an industrial synth/jazz fusion. It has a seething heat to it that culminates in Garner’s breathy groans near the end.

“John Wayne Is Big Leggy”, when released as a first single in 1982, went to number 11 in the UK. The lyrics tell of the sexual exploits between the western hero and his Indian bride.

The album closes with “Here Comes the Beast”, another slinky and kinky mid-tempo tune about a dark and dangerous guy. It has a really funky bass line and pounding percussion.

During my senior year of high school, I first discovered Haysi Fantayzee from listening to the local college radio station. Those initial singles are what inspired me to seek out the album in early 1983; that vinyl got a lot of play on my stereo over the next couple of years until I got rid of my record collection in the early 90’s. I really liked how the group experimented with styles and sounds. About a year or so ago, I found a copy of the CD for sale online which included not only the original album but a number of non-album B-sides and remixes. It was nice to have this music back home again in my collection.
Posted by Martin Maenza at 4:30 AM