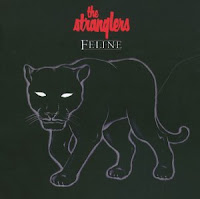 Happy New Year and welcome to 2013. This year, we'll be focusing on the thirtieth anniversary of albums released in 1983 (a landmark year for me as it was the year I graduated from high school and started college). I hope I can discover a few new classic gems to add to my music library as I did last year.

Today (January 1st) back in 1983, the English rock band the Stranglers released Feline, its seventh studio album. The record charted at number 52 in Germany, 39 in the Netherlands, number 18 in New Zealand, number 16 in Norway and number 4 in the UK. The group's line-up at the time consisted of J.J. Burnel (bass, vocals), Jet Black (drums), Hugh Cornwell (guitar, vocals), and Dave Greenfield (keyboards, vocals).


Side one begins with the gentle synths of "Midnight Summer Dream". A remix version of the song was released as the second single, topping out at number 35 in the UK and number 24 in Ireland. I like the rhythmic swing to this song which tells of an enlightening evening encounter with a mysterious stranger.

I like the guitar opening on "It's a Small World" but then it sort of gets lost with the first verse. It comes back, with a bit of Spanish flare a little later on, but I’m already kind of over the track.

Burnel redeems things a bit with his bass groove on "Ships That Pass in the Night", a tune about being out on the town and trolling for a romantic encounter with little success.

"The European Female (In Celebration of)" was the first single; it went to number 9 in both Ireland and the UK. Again, I really like Cornwell’s guitar work that grounds the rather lofty, high-pitched synths.

Side two opens with the slow, somber "Let's Tango in Paris".

"Paradise", the final single, only reached number 48 in the UK. I like the blend of the instruments on this one and the female vocals.

"All Roads Lead to Rome" bounces along with a pleasant electronic beat, as does the next track "Blue Sister". However, as interesting as the music is, the lyrical delivery does very little to excite me.

"Never Say Goodbye” closes out the album with some more intriguing guitar rhythms.

Well, Feline was a bit of a dog for me. While I like the musical compositions that the Stranglers are laying down here, none of the songs really stuck with me upon first listen. Maybe this is one of those albums that require multiple listens before it grows on you.
Posted by Martin Maenza at 4:30 AM

Awesome! Thank you for sharing this-the Stranglers are another band that's been on my list of artists to delve into-thanks to you they've just moved up higher on that list. Have a great 2013! oxox