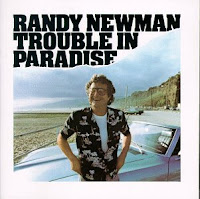 This month marks the thirtieth anniversary of the release of Trouble in Paradise, the seventh studio album from singer-songwriter Randy Newman. It climbed to number 64 on the US Billboard Hot 200 chart. Rolling Stone magazine ranked it at number 67 on its list of the 100 Greatest Albums of the 80's.

Newman had a number of guest performers on the record. Appearing on vocals are Lindsey Buckingham, Don Henley, Rickie Lee Jones, Christine McVie, Linda Ronstadt, Bob Seger, Wendy Waldman and Jennifer Warnes. On the music side, the record also featured Steve Lukather and Jeff Porcaro of Toto, Waddy Wachtel and many more.


Side one opens with "I Love L.A.". As the second single from the album, it stalled at number 110 on the US Billboard chart. The lyrics sarcastically bash one of the biggest cities in the US, from its dichotomy between wealth and poverty to the flashy facades on the Tinseltown elite. I remember one of the later seasons of Ally McBeal that featured this song in a couple episodes when John Cage and Richard Fish went out to California to recharge their batteries.

"Christmas in Cape Town" tells the tale of a bigoted woman and her distaste for the residents of the South African city. Newman does not pull any punches with the language on this song; the use of the N-word would have gotten him in serious hot water if it came out today.

Paul Simon appears on the next track "The Blues" which he co-wrote with Newman. This first single from the album reached number 51 on the US Billboard Hot 100 chart thanks to a bouncy pop sound. The duo sings of a man who channels the many hardships of his life into music.

"Same Girl" was the B-side to the first single. With a melancholy piano line, Newman laments how the woman he is with has not changed after all the years they have been together.

On "Mikey's", Newman dips into the synthesizer pool for his tale of a racist man whose wife has left him so he goes to his local bartender to unload.

"My Life Is Good" tells of a wealthy Los Angeles songwriter who likes to brag and throw his weight around.

Side two begins with "Miami", a calypso-tinged tune that talks about the tropical heat and the trouble he gets into every time he visits.

"Real Emotional Girl" is a bittersweet ballad about a woman so in love that her man is her everything.

"Take Me Back", with its festive carnival sound thanks to the keyboards, is a song about wanting to return to the place of one’s youthful happiness.

"There's a Party at My House" is an up-tempo track about a raucous celebration. I like the rag-time piano and the saxophones on this one.

"I'm Different" is a confident statement of self-awareness, complete with the lovely backing harmonies of Ronstadt, Waldman and Warnes.

"Song for the Dead", the final track on the album, was also the B-side to the second single. With a military drumbeat and dark overtones, it addresses those who died during the Vietnam War.

I must admit that I was never a big fan of Randy Newman’s music as a teenager. I think the many layers of his songs were a bit too deep for the carefree escape I used music for. As an adult, though, I can see that Newman was using wit and humor to convey meaningful messages on albums like Trouble In Paradise and others. His music is definitely something I need to look into a bit more.
Posted by Martin Maenza at 4:30 AM