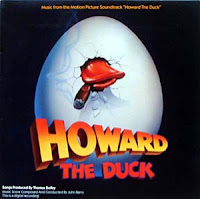 On August 1st, 1986, I was attended a summer session in college. Still, I took the time away from academics to hit the movies to see the big budget theatrical release Howard the Duck. The film was produced by George Lucas, and starred Lea Thompson (as Beverly), Tim Robbins, Jeffrey Jones, Holly Robinson, Liz Sagal, and Chip Zien (the voice of Howard). The science fiction comedy was based upon the Marvel comic book of the same title. The musical score was done by Academy Award winner John Barry and also featured songs by Thomas Dolby.

With all those talents connected to the project, you would have expected this film to be a major hit, right? Sadly, the box office did not get it. I have more thoughts on the film after we talk about the music.


The soundtrack album was split into two parts. Side one featured the songs by Thomas Dolby, some of which were performed by the girl-rockers in the film Cherry Bomb. Thompson performed her own singing as well.

Side one begins with “Hunger City”, a new-wave rocker with an urban, gritty groove to it. The track was released as a twelve-inch promotional single under the group name Dolby’s Cube.

“Howard the Duck theme”, co-written by Dolby and George Clinton, is an energetic dance track that also spent some time on the MTV video rotation. Clinton lent his voice to some of the backing vocals, and Joe Walsh played guitar on the track as well. It was released as both a regular single and a twelve-inch dance remix.

“Don’t Turn Away” opens with the harmonica playing of Stevie Wonder. Dolby sang lead on this tune about a friendship turning into something more.

Walsh also did some guitar work on “It Don’t Come Cheap”, another up-tempo rocker. The lyrics talk about working hard for what you want.

“I’m On My Way”, a bouncy dance track, features the lead vocals by Tata Vega.

First up is “Lullaby of Duckland”, a smooth jazzy piece with sensual horns. It is used in the opening of the film, before our web-footed hero is snatched from his home planet to Earth.

“Journey To Earth” segues from the previous track to a more urgent composition as Howard is thrust into a world he never made.

“You’re the Duckiest” is a soft, sweet romantic piece with strings and saxophone.

“Beddy-Bye For Howard” is next. It too has a soft jazz tone to it.

“Dark Overlord” is a more ominous theme, fit for the alien villain of the film. The later half has some heroic elements to it as Howard works to dispose of this threat to all mankind.

Now, I was a fan of Howard the Duck from his comic book days in the late 1970’s. Created by Steve Gerber, the book featured a dark-humor, satirical side that made it very popular with some readers. When the color comic was cancelled, it moved to a black-and-white magazine format for the early 80’s that allowed the themes to get a bit more adult. For me, the magazine period was my favorite of Howard’s published exploits to date.

As such, I was very excited to see the film when it came out.

Unfortunately, CGI was not yet perfect in 1986 and thus the film suffered a bit by the decision to have Howard be portrayed a small actor in a duck suit. I think if this film were redone today, with CGI effects like 2011’s Paul, that it would really work swimmingly. Audiences would believe a talking alien-duck could interact with human actors.

Nonetheless, I proudly own a copy of 1986‘s Howard the Duck on DVD and still consider it in my top-15 favorite big-screen comic book adaptations.

Discussion of the movie, and its obvious troubles, aside, I'm glad to read that you know about the comic book. I think, like the movie Dune, if you knew the back story of Howard the Duck, the movie wasn't so bad.

In college the radio station on campus had this record and I used to play the title cut as sung by Lea Thompson, every so often. I think the music still holds up alright because of Dolby. He is certainly no slough.

As usual, thanks for taking a run at this obscurity.