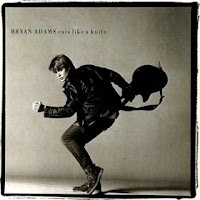 Today (January 18th) marks the thirtieth anniversary of the release of Cuts Like a Knife, the third studio album from Canadian rocker Bryan Adams. The Platinum seller went to number 52 in Australia, number 24 in Germany, number 22 in Sweden, number 21 in the UK and number 8 in both Canada and the US Billboard Hot 200.

This record became a breakout hit for Adams, exposing him to a wider audience. A number of popular music videos running on MTV at the time certainly helped as well. In Canada, it earned him a Juno Award for Composer of the Year.


Side one opens with "The Only One", a mid-tempo rocker about finding that right person with whom to settle down.

On "Take Me Back", Adams pleads with his former love to let him back into her life.

The third single "This Time" reached number 41 in the UK, number 32 in Canada, number 28 in Ireland, and number 24 on the US Billboard Hot 100. This is one of those 80’s songs that I will find myself singing along loudly to the chorus. It reminds me of those angst-filled from-afar obsessions of my late teens.

"Straight From the Heart", the first single, went to number 51 in the UK, number 20 in Canada and number 10 on the US Billboard Hot 100. Adams wrote it when he was a teenager in the late 1970's and was first recorded by Ian Lloyd on his 1980 album Third Wave Civilization. Bonnie Tyler recorded it as well for her 1983 album Faster Than the Speed of Night. This ballad is driven by Adams’ passionate piano riffs.

The second single was "Cuts Like a Knife"; it peaked at number 15 on the US Billboard Hot 100 and number 12 in Canada.

Side two begins with "I'm Ready", which Lloyd recorded in 1979 on his album Goose Bumps. Adams had a successful single release of this one in 1998 after an MTV Unplugged session. For me, the song has a bit of a Foreigner feel to it. Not surprising, Lou Gramm of that band did some background vocals for the album.

"What's It Gonna Be" keeps up that mid-tempo beat of the previous track. For me, this is the first one on the album that doesn’t quite click.

"Don't Leave Me Lonely" was a co-collaboration with KISS drummer Eric Carr while working with the band on their Killers album. It has hints of a harder edge to it that makes one wonder how KISS might have recorded it.

"Let Him Know" has a slight throwback sound to the early days of rock ‘n’ roll.

The album closes with the gentle ballad "The Best Was Yet to Come". Co-composer Jim Vallance plays the electric piano on this track.

Cuts Like a Knife is a good album with a number of memorable hits to it. In 1983, I was all over the singles from radio and MTV airplay. After reviewing the whole album, there are a couple additional tracks I will likely be adding to my collection; the first side of the record is rock solid.
Posted by Martin Maenza at 4:30 AM