The Oak Ridge Boys - American Made 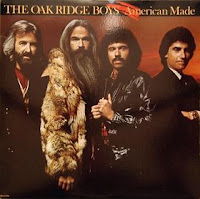 Tomorrow (January 20th) marks the thirtieth anniversary of the release of American Made, the ninth studio album from the American country band the Oak Ridge Boys (Duane Allen, Joe Bonsall, William Lee Golden and Richard Sterban). The record went to number 51 on the US Billboard Hot 200 and number 2 on the Billboard Country charts. It also generated a pair of number 1 country hits in the US.


Side one begins with "Love Song". As the second single, it went to number 1 on both the Canadian and the US Country charts. The track opens with an old-time piano riff before moving into a bouncing beat and blazing horns, the later provided by the Nashville Hornworks. I really like the throwback sound to it.

After a rousing opening, "She's Not Just Another Pretty Face" takes things down to a beautiful ballad. Sterban’s rich bass vocals really stand out on this track’s verses.

The up-tempo "Amity" tells of a reunion of old childhood friends and the profession of a long-standing love. I like the steel guitar on this one, played by Lloyd Green.

"You're The One", another ballad, features Bill Sanford on the mandolin.

"Down The Hall" tells of a guy who has found all the happiness he needs in life with the woman down the hall. This simple, sweet love story is easily my favorite track on the first side.

Side two opens with the title track. As the first single, "American Made" went to number 12 on the Canadian Country and number 1 on the US Country charts. It also crossed over to number 72 on the US Billboard Hot 100. The song was involved in some controversy when it was licensed to Miller Beer for a series of television ads (with alteration to the first two lines of the chorus). Though the band did not want the song used that way, it was not their decision. In protest, they did not play the song live during the period the commercials ran.

It is ballad time again with "Any Old Time You Choose" where a man is desperate to see his lover once more, completely at her discretion.

"Heart on the Line (Operator, Operator)" was chosen for the B-side of the second single. Larry Willoughby, one of the co-writers of the song, released it on his 1984 album Building Bridges and took the song as a single to number 65 on the US Country charts.

The album closes out with two more ballads - "You Made It Beautiful" and "I'm So Glad I'm Standing Here Today".

Country music was not a big part of my listening back in 1983, so American Made was hardly on my radar. I certainly knew who the Oak Ridge Boys were and enjoyed their performances when seen on a variety show or such. I found this album to be pleasant to listen to with songs that hold up very well thirty years later.
Posted by Martin Maenza at 4:30 AM