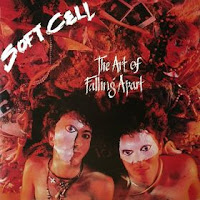 
The album was a Gold seller in the UK, climbing all the way to number 5 on the charts. Over here in the US, it reached number 84 on the Billboard Hot 200. Besides Almond on lead vocals and Ball on synthesizers and backing vocals, the album also features John Gatchell on trumpet and horns.

Side one opens with “Forever the Same”, a pitying look at a man who lives an uneventful life working day in and day out on an assembly line.

“Where the Heart Is”, the first single, hit number 21 in the UK and number 14 in Ireland. The track is a melancholy teen drama which really hit home with me for some reason when I first heard it. I guess I was just in the right frame of mind for it when I first heard it back in 1983.

As the second single, “Numbers” peaked at number 25 on the UK charts and number 16 in Ireland. The protagonist of the song comes to the realization one day that he has become just another one-night-stand for someone else just as he so casually had previously done with so many. Consider it a sort of sexual karma.

“Heat” was also released as a single but failed to make much noise on the charts. The music on this extended album cut builds as the lyrics smolder; it is good combination. There is some great symbolism in this one too.

Side two starts with some “Kitchen Sink Drama”. This time we have the story of an average house wife who struggles to get through the day without the help of her “friends” that come in little bottles. The simple piano opening really sets the mood nicely for this one, counterbalancing the “everything is okay” façade with the underlying secrets.

“Baby Doll”, the longest track on the album, exposes the unflattering side of prostitution. It is a very dark and dramatic piece.

“Loving You, Hating Me” was released as a remix single from the album. It tells of a couple who have become totally disconnected - while one is still in love, the other is full of just loathing.

The title track closes out the record. “The Art of Falling Apart” has a chaotic synth riff running through it that mirrors the whole collapse of the lead character’s life.

The initial release of the original vinyl album also came with an EP that included a medley of Jimi Hendrix songs (“Hey Joe”, “Purple Haze” and “Voodoo Chile”) and another track called “Martin” about a very disturbed, reclusive young man.

I recall seeing this one in the local record store but not picking it up initially as the cover was a bit off-putting and disturbing. Little did I know that indeed the record would delve into the dark side of lives. My best friend John, who was also into Soft Cell, bought the copy and thus I would hear it on occasion whenever I hung out at his house. Back then, I mostly enjoyed the synth beat of the music but as I got older I came to appreciate the complex layers and deep emotions put into each song.