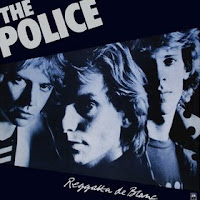 After a strong debut record the year prior (click here for that review), the Police was back on October 5th, 1979, with their second album Regatta de Blanc. Like its predecessor, it too went Platinum. Chart-wise, it hit number 25 on the US Billboard Album chart, number 21 in Sweden, number 16 in Germany, number 4 in New Zealand, number 3 in Canada, and number 1 in Australia, the Netherlands and the band’s native UK.


Side one opens with “Message in a Bottle”, the first single from the album. It hit number 74 on the US Billboard Hot 100, number 48 in Italy, number 35 in Germany, number 11 in New Zealand, number 5 in France, number 2 in Canada and the Netherlands, and number 1 in Ireland and the UK. The lyrics tell of a lonely castaway who is searching for love and sends out a note. After no initial response for over a year, he wakes up one day to discover there are countless others like him the world. This track is a big favorite of mine, particularly because it was the unofficial theme song of our college Student Orientation Service during the 80’s. We played it at every party and banquet, chanting out the chorus (“…sending out an SOS, sending out an SOS…”). Good times.

The instrumental title track “Reggatta de Blanc” is next. It won the Grammy Award for Best Rock Instrumental Performance in 1980. Translated from French, the title means roughly “white reggae”.

“It’s Alright for You” has a rapid-fire dance rhythm to it, further punctuated by Sting’s machine-gun delivery of the lyrics on the verses.

“Bring on the Night” opens with a funky bass riff before taking on a more Island flavor. The lyrics beg for the coming of the end of an intolerable day.

Closing the side, “Deathwish” is another up-tempo tune. This time, the lyrics deal with a reckless driver who has little regard for his own personal safety while behind the wheel.

Side two begins by “Walking on the Moon”, the second single from the record. It only reached number 65 in Canada, but it did go to number 12 in New Zealand, number 9 in France, number 2 in Italy, and number 1 in Ireland and the UK. With its rhythm, the song has always given me that sense of someone stumbling through life with their head filled with a haze.

Copeland takes the vocal lead for “On Any Other Day”, a matter-of-fact accounting of a miserable suburban life.

“The Bed’s Too Big Without You” is another track about loneliness after a failed relationship. I really like the reggae elements of this one.

“Contact” stalks along on a slow, grinding groove. It matches well the bitter, spiteful tone of the lyrics.

“Does Everyone Stare” tells of a nervousness of a guy as he prepares to re-enter the dating world. The piano accompaniment gives the song a bit of an old-fashioned feel to it.

“No Time This Time” closes the record on a very quick pace, reflecting the fast-paced life of the singer who has no time for quick kisses or the morning paper.

While I had heard quite a bit of Reggatta de Blanc growing up (my older brother has a copy on vinyl), I had not gotten too much into it at the time beyond the two big hit singles. A few years ago, I added this album along with a number of others from the Police to my digital music library. I really came to appreciate the body of work of the group when listening to full albums from start to finish.
Posted by Martin Maenza at 6:47 AM