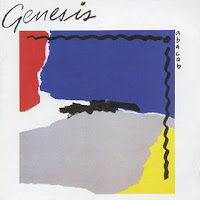 Between his 1981 solo release Face Value (click here for that review) and his 1982 Hello, I Must Be Going! (click here for that review), Collins rejoined his Genesis bandmates Tony Banks and Mike Rutherford for their eleventh studio album Abacab. Released on September 14th of 1981, it charted at number 11 in Sweden, number 7 on the US Billboard Album chart, number 6 in Germany, number 4 in the Norway and number 1 in the UK.


Side one opens with the title track. As the first single, “Abacab” reached number 35 in Australia, number 28 in Germany, number 26 on the US Billboard Hot 100, number 11 in Canada, number 9 in the UK and number 8 in Norway. The song initially had no title and was labeled as such based on the musical sections of the song (A-B-A-C-A-B). The final version of the song, ironically, failed to keep that structure pattern yet they kept the title just the same. This song just gets my blood pumping whenever I hear it; the pounding percussion and the ensnaring synthesizers really take hold and don’t let up for the entire seven minutes of the album cut

“No Reply at All”, the second single, features the horn section of Earth, Wind and Fire (whom Collins used on his solo effort from that year). It charted at number 29 on the US Billboard Hot 100 and number 7 in Canada. On the tour for the album, Collins stated that the song is about miscommunication between two people in a relationship.

“Me and Sarah Jane” takes things down a mellower road with a more introspective piece. It has a bit of a throwback feel to earlier Genesis tunes from the 70’s.

“Keep It Dark”, released as a single in Europe only, charted at number 33 in the UK. This one is about a man who is abducted by aliens and, when he returns, lies about the experience and instead says he was kidnapped. He feels the latter is a more palatable scenario. The track has a really interesting industrial/mechanical sound to it.

Side two begins with the epic seven and a half minute long “Dodo/Lurker”. It opens on a big, dramatic note before dropping into a stalking groove.

“Who Dunnit?” is the first track here that takes on a very 80’s alternative sound to it. In some ways, this track reminds me a bit of Ian Dury in its vocal attitude and musical presentation.

“Man on the Corner”, the last single, hit number 41 in the UK, number 40 on the US Billboard Hot 100 and number 28 in Canada. The moving lyrics tell of a homeless man who spends his days on a street corner, shouting at the people who pass by. I like how this one builds from a simple keyboard opening into a broader piece

“Like It or Not” is another mid-tempo relationship song. The opening has a very familiar feel to it, like something you know you’ve heard before but can’t quite place it.

“Another Record” closes the album out the album. The harmonica gives it a wistful, melancholy element.

The 80’s is really when I discovered Genesis, starting with this album. In a number of ways, Abacab feels like a bit of extension of Collin’s solo work in the early 80’s. That is not surprising as he does lead vocals and his drumming style is so distinctive. I am definitely a fan of the hit singles from this one but also found some surprising gems in the deeper tracks too.
Posted by Martin Maenza at 4:30 AM