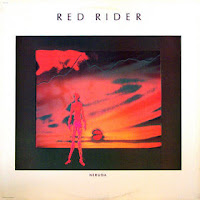 This month marks the thirtieth anniversary of Neruda, the third studio album from the Canadian rock band Red Rider. Like the previous two albums, this one too went Platinum in Canada, selling move than 100,000 copies. It also reached number 66 on the US Billboard Hot 200.

Tom Cochrane was the band's lead singer as well as songwriter and guitarist. Rob Baker was on drums and Ken Greer was on guitars and vocals. Jeff Jones played bass and Steve Sexton played keyboards.


Side one begins with "Light in the Tunnel", a relaxing instrumental piece that conjures up the image, for me, of a drive down a desolate mountain road in the late hours of the evening.

"Power (Strength in Numbers)" was popular on US Mainstream Rock stations, reaching number 13. Honestly, I do not recall this one from my past; if I heard it back in the early 80’s it certainly did not stick with me. I do like the strong guitar chords and the rhythm of this one.

The first single "Human Race" went to number 29 in Canada and number 11 on the US Mainstream Rock charts. I have a vague recollection of this one, mostly from the brief chorus. Like the music, it is an elusive dream that you struggle to remember after waking up suddenly. The lyrics are about overcoming adversity and getting back into life again.

"Can't Turn Back" definitely has the early 80’s sound thanks to the cool synthesizer opening. The rest of the song has a bit of a Tom Petty feel to it. This one is definitely my favorite of the tracks on side one so far.

"Napoleon Sheds His Skin" is a curious piece that weaves an interesting lyrical tale. At nearly six minutes, there are a couple points for the band to really get into it.

Side two starts with "Walking the Fine Line". I like the give and take between the synthesizers and the guitars at the start.

"Winner Take All" is next. It is kind of a middle of the road rock track.

"Sights on You" saunters in after a brief piano opening.

The next track "Crack the Sky (Breakaway)" was also popular on the US Mainstream Rock charts, reaching number 39.

The album closes with "Work Out", a tune that advises that one needs to keep moving forward and on to better things, a predominant theme for the whole album.

If I were to rate Neruda, I would give it a fair, mid-range rating. While none of the tracks turned me off, by the same token very few really got me excited. I think I might have enjoyed it more if I had more history with it. Red Rider was not a band that really made a big showing in the music circles I listened to back in high school.
Posted by Martin Maenza at 4:30 AM