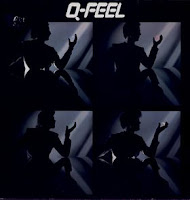 This month marks the thirtieth anniversary of the self-titled debut album Q-Feel. This British synth pop group was made up of Martin Page (bass and vocals), Brian Fairweather (guitar and vocals), Chris Richardson (keyboards and backing vocals) and Trevor Thornton (drums). Q-Feel released a single in 1981 called "Doctor on the Radio" but became known thanks to the releases on this record.


Side one opens with "Crosstalk", which was released as a promotional only single. Richardson’s keyboards are up-front and center, directing the tempo for this dance tune.

"Electric Feet (Rhythm Machine)" is an up-tempo ode to an amazing dancer who is one with the music.

"Go For It" keeps up the pace with a message of inspiration, coupled with a funky bass line and a driving beat. Of the four on side one, this one is definitely my favorite as it has more of an R&B flavor to it.

Side two begins with the group's only hit single and likely the one most 80‘s fans are familiar. "Dancing In Heaven (Orbital Be-Bop)" first gained notoriety as an entry in A Song For Europe, the UK's pre-selection round for the Eurovision Song Contest in 1982. It charted at number 110 on the US Billboard chart and number 18 on the US Billboard Club charts. The song has since been featured in the 1985 film Girls Just Want to Have Fun and the 2007 film Kickin' It Old Skool, not to mention dozens of 80‘s music compilations. Thorton’s drums really shine on a bridge section midway through the song.

"Heroes Never Die" is a World War II themed song that features some rap elements as bridges between the chorus and verses. It s an interesting blend of theme and music that works quite well.

"Time Waits For No One" is next. It has a catchy rhythm with a cheer-chant aspect that backs the chorus. Fairweather has a nice guitar solo on this one.

"Red Light Zone", which closes out the record, appeared on the B-side of the group's 1981 single. It has a funky swing to it, clearly inspired by some late 70’s music.

Q-Feel is definitely a high-energy record; Q-Feel keeps the party going from start to finish. I was not familiar with this album back in the early 80’s, most likely due to limited distribution here in the States. Had I run across it, though, I definitely would have picked it up as it was right in line with the music I enjoyed at the time. As it was the only record made by the group before they broke up a year later, it is equally difficult to find today. Good thing that nearly everything can be found on the Internet if you just look hard enough. I am glad I sought it out to give it a listen.