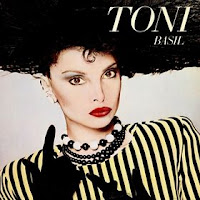 On the heels of her Gold selling debut Word of Mouth (click here for that review), Toni Basil released her self-titled second album a year later in January of 1983. Unlike her debut, which was fueled by the number 1 hit "Mickey", this one failed to make any major chart impacts? Today, for its thirtieth anniversary we will give Toni Basil a listen.


Side one opens with "Over My Head", a song about being deeply involved with someone to the point you are blind to what might be really going on. The single had a brief stint on the US Billboard Hot 100 (stalling at number 81) but it showed more legs on the US Billboard Dance charts (where it reached all the way to number 4).

"I Don't Hear You" puts a tale of a post-breakup longing to a thumping dance beat.

"Easy For You To Say" mixes a heavy guitar riff with a strong synth line to create an entrancing mid-tempo melody.

"Suspense" was also popular on the US Billboard Dance charts, topping out at number 8. The lyrics tell a tale of a secret rendezvous on a darkened street corner.

"Go For the Burn", a song about pushing through the hard times, features some cool synth effects and a very funky bass line.

Side two starts with the bouncing beat of "Spacewalkin' the Dog", a tune about taking a unique break from the day to day grind.

"Street Beat", the first single, climbed to number 63 on the US Billboard Dance charts. It has a strong cadence to it that reminds me of her previous hit “Mickey”.

The high energy "Do You Wanna Dance" features a pounding beat as well as some turntable scratching in the background.

The record closes with the catchy "Best Performance", a tale of teenage drama.

To date, Toni Basil was the last album this multi-talented artist has released. I would gather the poor chart performance may have had something to do with that decision, but I have to suspect that poor marketing played into the weak sales. I had not heard much from this album until a number of years ago when I stumbled upon retrospective album from Toni Basil that drew from her two releases. Since then, it has gotten a generous spin on my 80’s play list on my iPod. If you like 80’s dance music, you might want to give a few of these songs a listen.