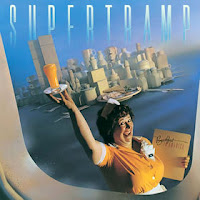 On March 29th, 1979, the British rock group Supertramp released Breakfast in America, their sixth studio album. This was the group’s best selling album ever, going Diamond in Canada, Platinum in the UK, and four-times Platinum in the US. Chart-wise, it hit number 3 in Italy and the UK, number 2 in Japan and Sweden, and number 1 in Australia, Austria, Canada, France, Germany, the Netherlands, Norway and on the US Billboard Hot 200.

While nominated for the Grammy Award for Album of the Year, it did win Best Recording Package and Best Engineered Album Non-Classical.


The roster of the band consisted of Rick Davies (keyboards, vocals, and harmonica), John Helliwell (saxophone, vocals, and woodwinds), Roger Hodgson (guitars, keyboards, and vocals), Bob Siebenberg (drums) and Dougie Thomson (bass). Davies and Hodgson composed all of the songs on this record.

Side one starts with “Gone Hollywood”, the B-side to the second single. After a building piano opening, the lyrics tell of a person who has moved to California to become a big star. However, that dream is more difficult to attain than it would appear.

“The Logical Song” was the lead single from the album. It went to number 14 in Austria, number 13 in the Netherlands, number 12 in Germany, number 7 in the UK, number 6 on the US Billboard Hot 100, and number 1 in Canada. The lyrics put down the educational system. The piano hooks on this one always got to me as did the inventive, intelligent word play of the lyrics; it is definitely a fun one to sing along to when it comes on the radio or wherever. Helliwell’s saxophone solo is also a Seventies classic.

“Goodbye Stranger”, the third single, stopped at number 57 in the UK charts but went all the way to number 15 on the US Billboard Hot 100 and number 6 in Canada. This one has a great rhythm to it that I will find myself unconsciously snapping my fingers.

The title track “Breakfast in America”, as the second single, was a minor hit in the US (only reaching number 62 on the Billboard Hot 100) yet it climbed all the way to number 9 in the UK.

“Oh Darling” closes the side with the singer’s heartfelt plea to his girlfriend.

Side two begins with “Take the Long Way Home”. As the fourth single, it reached number 10 on the US Billboard Hot 100 and number 4 in Canada. Davies’ harmonica opening really invokes that feeling of a lonely journey on a vacant highway, trying to reach a new destination and find one’s way spiritual as well.

“Lord Is It Mine” is a beautiful piano-based ballad.

The B-side to the first single was “Just Another Nervous Wreck”, a bouncy tune about the world crashing down around the singer.

“Casual Conversations” opens with a soft Wurlitzer-organ backing. I like the simple, stripped down composition here with the slight accents of saxophone. It makes for a very intimate number.

“Child of Vision”, the longest cut at over seven minutes in length, is a commentary on how Americans lived at the time.

My older brother owned a copy of Breakfast in America on vinyl, so I heard a good bit of this one coming from his bedroom adjacent to my own growing up. Supertramp also got a good bit of airplay on the local album-oriented rock station and the pop station, thanks to a number of their biggest hits being here. I rather enjoy this record as it reminds me of my middle teen years.
Posted by Martin Maenza at 4:30 AM